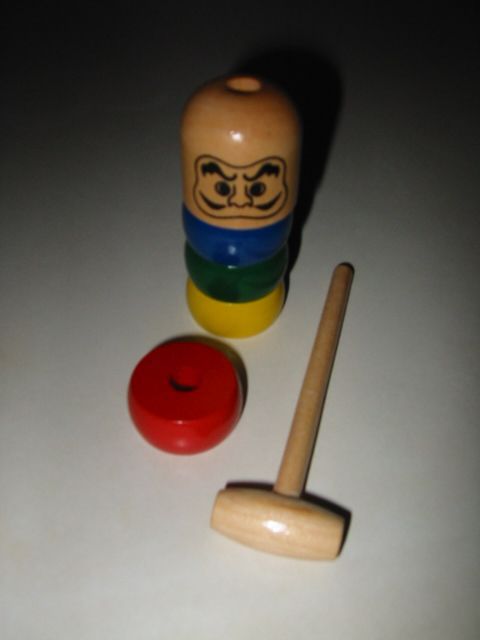 Daruma Otoshi is a Japanese cultural toy. The first part of the name "Daruma" is the name of the doll (usually the face of a angry-looking Japanese samurai-like guy, but also can be friendly looking, depends on the artist who draws the face),"Otoshi" means "to drop". This traditional Japanese game requires a good eye and fast reflexes. The purpose of the game is to knock the center pieces out with the hammer without causing the doll on top to fall over. The doll on top is called daruma; he represents the Buddhist priest Bodhidharma who is said to have lost the use of his arms and legs after meditating for nine years. Today daruma are used as a charm for the fulfillment of a special wish, for example, passing the entrance exam to high school or winning an election. The character written on this darumaÂs belly reads Âgfuku,Âh or good fortune. Japanese children can play with daruma otoshi when they are alone by seeing how many blocks they can knock out before daruma topples over. They may also play it with friends and take turns until someone causes daruma to fall over. Usually made of solid wood. Similar to: BASH! Toc Toc Woodman