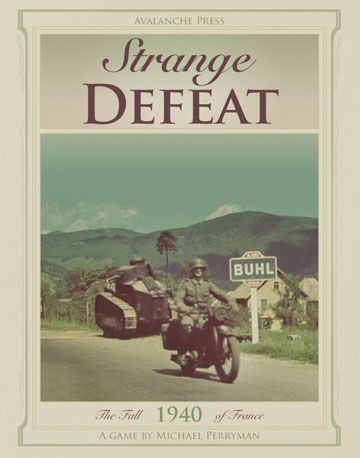 From the publisher: Strange Defeat is a sequel to Defiant Russia and Red Vengeance. Like those games, it’s designed as an easy to learn, fun game. The map portrays the Netherlands, Belgium, western Germany and northern France. Players control the actual units that fought in this campaign; most of them represent army corps with a handful of divisions. The typical Allied unit is as good as the typical German unit, and many of them are better. The German player must play to his or her advantages: an air force designed for tactical support, parachute regiments to assault key points, and concentration of force. Like Defiant Russia and Red Vengeance, Strange Defeat isn't a very large game. The map is 34 x 22 inches, divided into very large hexes for ease of play. There are 140 playing pieces, and it comes in a small box that's easy to store. The game plays very quickly, concluding in about 90 minutes, with a minimum of charts and tables to consult. The game uses the same system as Defiant Russia. Game Scale: Game Turn: 1 day Hex: 15 miles / 24.1 kilometers Units: Regiment to Corps Game Inventory: One 22 x 34" five color map One dual-side printed countersheet (140 1/2" counters) One 16-page Strange Defeat One Player Aid/Errata Card Two 6-sided dice Solitaire Playability: Medium Complexity Level: Low Players: 2 or more Playing Time: 1-2 Hours