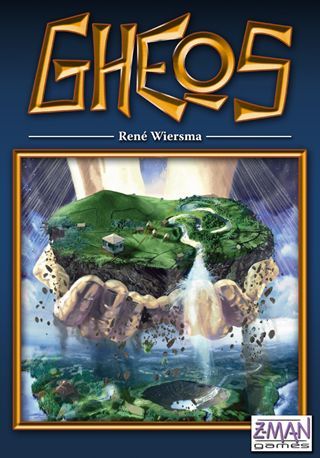 The players are gods at the dawn of time, creating earth's landscape and inhabiting it with people. They can command the creation and destruction of continents and the rise and fall of civilizations. As gods, players seek to gain followers among the civilizations. They offer those followers luxuries, and oversee the building of pyramids and temples on their continents. In the end, the god with the most loyal, wealthy, and powerful followers will become ruler of gods, and wins the game... Play involves placing triangular tiles to form islands, coastlines and continents. Players can also replace tiles to reform the topography of the planet. Each civilization is represented by a color, and once a civilization is “born” a player can gain worshipers in that civilization, which in turn may score points for that player in various ways. The placement or replacement of tiles may result in civilizations migrating, or going to war with other civilizations. These things are resolved by the various icons on the tiles. The game is fairly simple, but offers quite a lot of tactical possibilities.