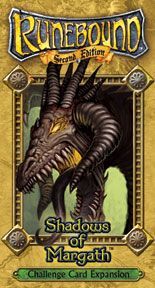 From the Fantasy Flight Games Website: "The Shadows of Margath expansion pack introduces an assortment of dangerous new monsters, encounters, and events that can be added seamlessly to the Runebound (Second Edition) basic game. There are no new rules to learn; the players can simply shuffle these new cards into their adventure decks and begin playing with them immediately." This expansion is an update of cards from the original Runebound: Shadows of Margath (First Edition) expansion for Runebound (First Edition). Belongs to the Runebound Series. Expands: Runebound (Second Edition)