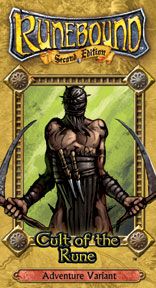 From the Fantasy Flight Games website: "The Cult of the Rune expansion pack is a whole new adventure set in the Runebound land of Terrinoth! The Dwarves of Forge have uncovered something best left hidden. No one seems to know where these ancient Runes came from, but their power is undeniable ... and pernicious. The Runes have managed to twist those around them into worshiping them like gods, and now ... they are spreading. The Cult of the Rune adventure variant replaces some elements of the Rise of the Dragon Lords adventure found in the Runebound (Second Edition) base game, creating an entirely new game experience! It includes 30 new adventure cards and a set of cardboard tokens." Belongs to the Runebound Series. Expands: Runebound (Second Edition)