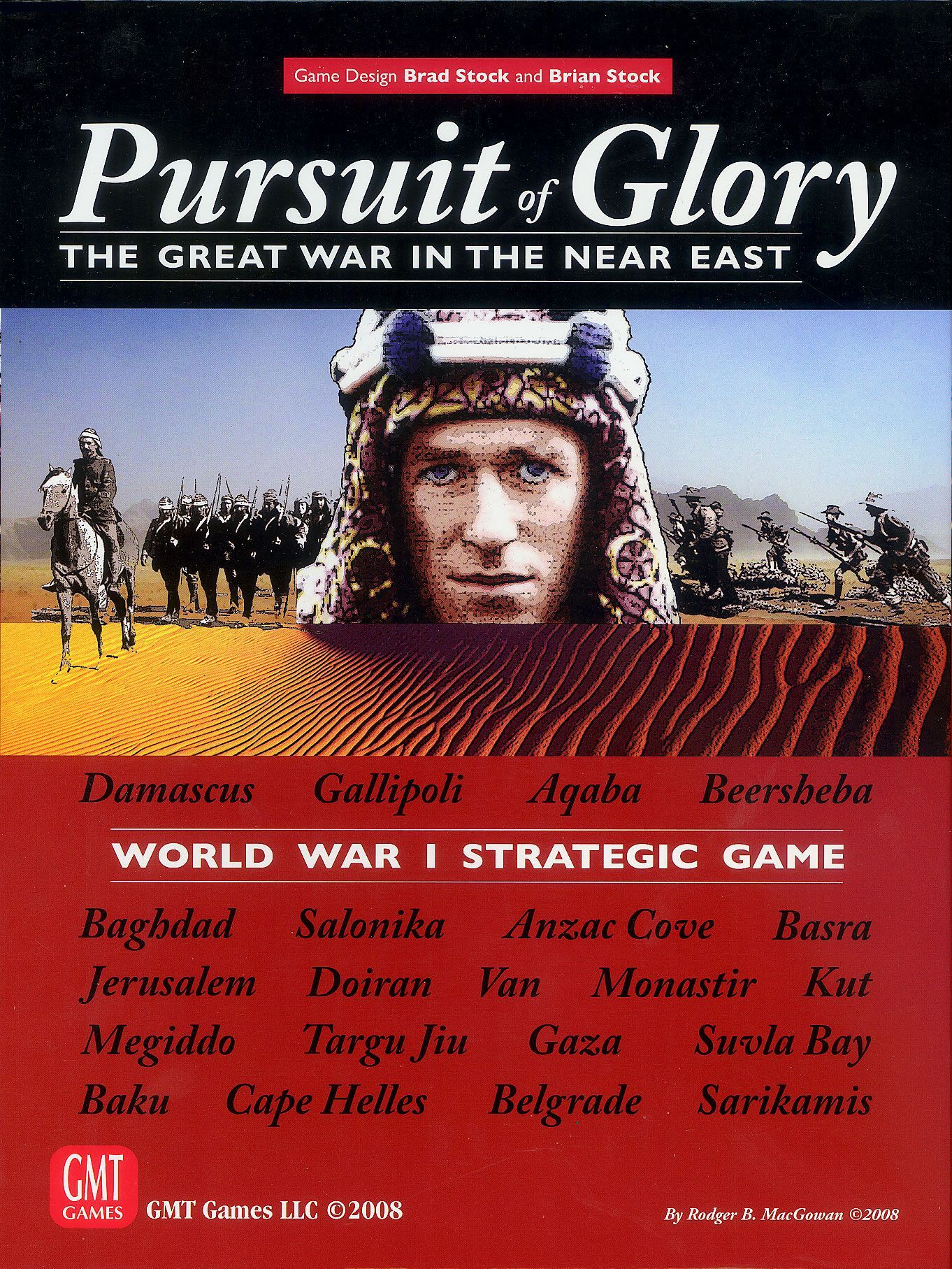 (from GMT website:) Pursuit of Glory: The Great War in the Near East is a sequel to the award-winning Paths of Glory. This game puts you in the driver's seat of the British/Russian alliance or the Ottoman Empire during World War One. Gallipoli, holy war, mutiny, and the Russian Revolution await. Walk in the shoes of men such as Churchill, Lawrence of Arabia, Enver, and Falkenhayn. The action stretches from India to the Balkans, from the Black Sea to Suez. Can the Germans inspire a Persian uprising or forge an alliance with Afghanistan? Can the Russians capture a warm water port? Can the British guard the oil that fuels the Royal Navy? Can the Turks capture the Suez Canal and spark a revolt in Egypt? In Pursuit of Glory you will constantly feel that you're on the razor's edge - on the verge of impending doom or of breakthrough and total victory. Your hand of 7 cards presents you with a rich array of strategic and operational opportunities. You must decide whether to use each card for its historic event, command points, or resources. You must then commit your forces to a variety of objectives: the Turkish-Russian frontier in Caucasia, the violation of neutral Persia, oil-rich Mesopotamia, the Suez Canal, the Balkans and its vital railroads. You must judge when it is right to invade Serbia or launch a new naval invasion (perhaps on the inset map representing Gallipoli). As the British, you must hold on while your Russian allies break through the Turkish lines in Caucasia and you bring your forces to bear through invasion and a gradual build-up of imperial might. As the Turks, your objective is to gain complete victory early, uniting your strength with Germany and crippling the British Empire in Egypt and India or to persevere. If you are looking for a game that is relevant, dynamic, fun, tense, and a frantic roller coaster of a game, you will enjoy Pursuit of Glory. Game Features TIME SCALE Approx. 1 year per hand of cards MAP SCALE Point-to-Point NUMBER OF PLAYERS One or Two COMPONENTS: Two full color counter sheets 110 full color playing cards One 22 x 34" full color map Rule Booklet Scenario Booklet Player Aid Cards Two 6-sided dice DESIGNER: Brad Stock & Brian Stock DEVELOPER: Tony Curtis & Neil Randall MAP, CARD, & COUNTER ART: Mark Simonitch (BGG description:) Pursuit of Glory is a stand alone sequel to Paths of Glory, a card-driven strategy game covering the first World War. Unlike the original game, which focused on the European theater of World War I, Pursuit of Glory focuses entirely on the Great War in the Middle East. Pursuit of Glory uses the same card-driven mechanics and point-to-point of the first game, but with some rules changes and modifications to better simulate the conditions of the war in the Middle East. It was developed by Brad and Brian Stock with the permission of Ted Raicer, the designer of the original Paths of Glory.