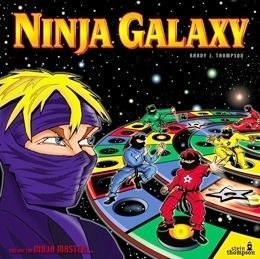 AD 3017 - In the Ninja Galaxy it has been discovered that the four main star systems are becoming unstable. A destructive virus is spreading. The Ninja Elders have decided that only one star system can be saved. The other ones must be quickly neutralized. Which ones? To decide, the four Ninja Clans will battle each other at the Galaxy Power Rings. The winner's star system will be saved. Advance RING-LEVELS by going through PORTALS. Sabotage your opponents with PORTAL-BLOCKERS, and VAPORIZE blockers in your way. Battle your opponents up close with LASER SWORDS, or eliminate them with LIGHT STARS. Finally, NEUTRALIZE the other star systems with the very powerful NEGATIVE ENERGY DISCS (NED). New Advanced Rules: Use your Ninja Master Card to come into the battle when your ninja is facing elimination. In addition, each ninja has a special ability and on the third hit-point is eliminated. This adds much more strategy to the game and plays in about an hour. Ninja Galaxy is a fun Space-Battle Adventure for the whole family and yet serious enough for the "gamer." A game of strategy, chance and fantastic finishes!