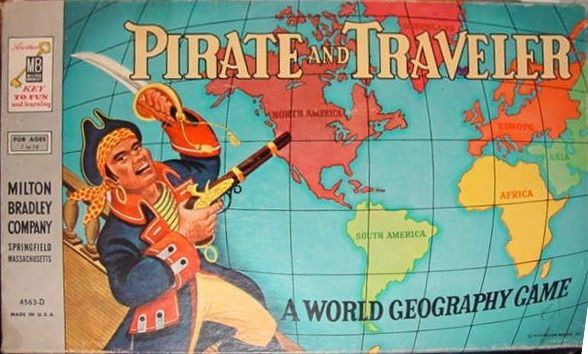 From the 1936 Edition Rules: "This is a Game of Travel, concluding with a Pirate fight. It comprises a Game-Board, Travel-Cards, Four Travelers, and Spinner. The Game-Board is a Map of the World. The Travel-Cards indicate journeys to be made by the Travelers, and the distance to be traveled in each move is determined by spinning. As the routes of travel are well-known railroad and steamship lines, the players acquire a knowledge of these, also the chief cities and ports and their principal articles of commerce..." The game was first published by Milton Bradley in 1911. Other known dates of publication include 1936, 1953, 1956, 1960 and (finally?) 1970. The game was also published in Great Britain by Chad Valley in the 1960's. Details of the world map, travel cards, etc. vary between editions.