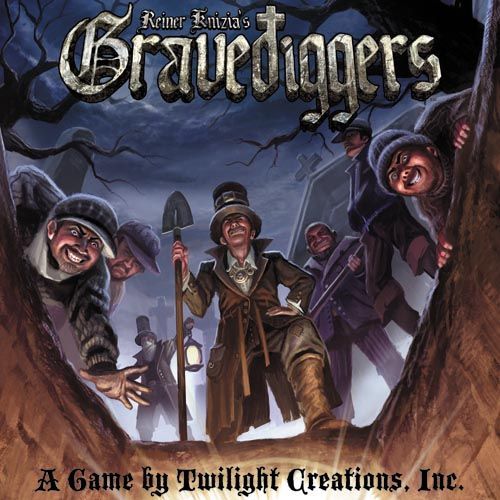 In Gravediggers (or Bank Robbers) players are competing to earn the most money by robbing graves (or banks). It's a hidden information, bluffing and deduction light family game. During setup each player receives a hand of 5 cards and 10 coins which are placed in hidden place. Regardless of number of players there are always formed five cemeteries on the table which receives one card each at the start of the game. On a player's turn the player has to reveal one of the tiles that show which action she will perform. There are four possible actions: 1. Play a card - the player has to play a card from a hand face down to one of the five cemeteries and then draw back to the hand of five cards. 2. Look at one card - The player has to look at one card which lays down at on of the cemetery while not showing it to other players. 3. Reveal one card - a player has to reveal and leave face up one of the cards laying in one of the cemeteries. 4. Rob the cemetery - A player has to choose which cemetery the players will rob. When robbing the cemetery each player chooses the amount of her money that she wishes to invest in robbing the cemetery. Then all amounts are revealed simultaneously. Then all the cards that lay face down in the cemetery are revealed and show the amount of money that can be robbed. The player who bids the least takes his loot first. She takes the money invested and the same amount from the cemetery following by other players. If there are insufficient money for one of the players she takes nothing from the cemetery and so do the players after her. Apart from money cards there are also special cards which changes the outcome of the robbery: Guard - Prevent the players from stealing the money. Everyone who invested 0 in this robbery receives 5 regardless of the money in the cemetery. Bandit - Prevent the players from stealing the money and also steals the money invested in this robbery by all players. Accomplice - reverse the order of players taking the money. Widow - Cancels all other special cards. When the deck is depleted the play continues until one of the players use all of her cards. After that the players rob all the cemeteries one after another and the game is over. The player who earned most coins is the winner.