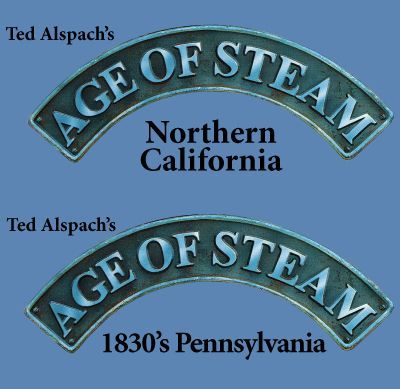 This Age of Steam Expansion expands the game to 1830's Pennsylvania and Northern California. 1830's Pennsylvania: This Age of Steam expansion takes place in 1830’s Pennsylvania, as the industrial revolution began, and the demand for coal to power locomotives and all manner of machinery started to peak. At that time, the railroad industry was driven by an abundant source of coal from the coal mines of Western Pennsylvania. Unique features to this map include coal-producing towns and cities in Western Pennsylvania, heavily-urbanized cities in Southeastern Pennsylvania, and special bonuses for coal (black cube) deliveries: coal can be delivered twice as far as your locomotive, or you can receive double income for its delivery! Northern California: This Age of Steam expansion takes place in Northern California, focusing on San Francisco, Oakland, San Jose, Santa Cruz and Sacramento, and the struggle to move goods across the San Francisco Bay Area. Unique features to this map include two bridges across the San Francisco Bay, the port city of Santa Cruz where goods line up for delivery, a three tile San Jose city with double goods growth, and the ever-changing destination of Sacramento, where the goods desired by that city are dictated by the flow of goods into Santa Cruz. This map is a redesign of the popular Age of Steam: Bay Area map (Essen 2005 Limited Edition), with modified cities and towns, with a map changed slightly in size to fit on a standard Age of Steam board. It is slightly more forgiving than the original map. From Ted Alspach, the designer of Age of Steam Expansion: Bay Area (Limited 2005 Essen Edition).