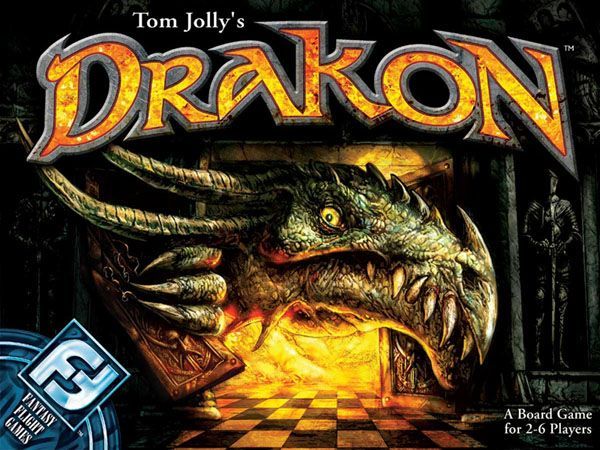 The old dragon Drakon has captured a brave band of adventurers who have sneaked into her lair to steal her gold. But rather than eat them immediately, Drakon has decided to make it a game: Greed shall set one of the adventurers free. She sends the frightened adventurers into her magical, mad vaulted chambers, and the first one to collect ten gold from Drakon’s maze gets to go free. The rest get to be lunch. Each turn, players must choose one of two options: (1) place a tile from their hand onto the board, expanding the dungeon; or (2) move their Hero to an adjacent tile. Many of the dungeon tiles have an icon that allows players entering that space to take a special action (for example, taking a piece of gold from the dragon's hoard, stealing gold from another player, or destroying a tile that is already in play). This is the third edition of Drakon, and includes the following updates: plastic miniatures are used for the heroes and the Drakon new tiles are larger (measuring 2.5 by 2.5 inches) and have all new artwork tiles include a combination of rooms from Drakon (second edition) and Drakon Expansion 1 new rules, variants, and player aids are provided each gold piece now has a value between 1 and 3 In the basic game, the first player to earn 10 gold wins the game. Some variants provide different winning conditions. Game last between 20 and 60 minutes.