Jeff Foxworthy's You Might Be a Redneck if... Game - Universal Statistics 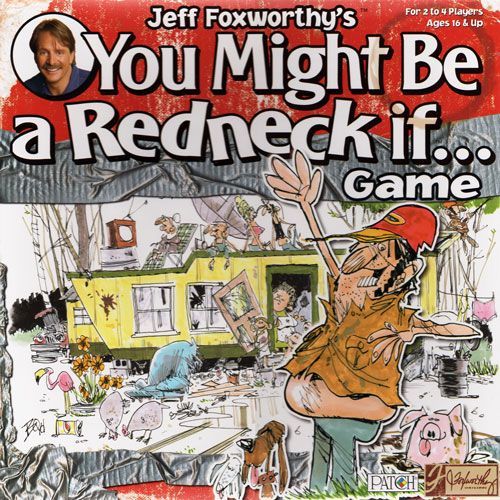 from the publisher Patch Products Patch Products was recently granted the rights to produce The You Might be a Redneck If... Game. Everyone's heard of Jeff Foxworthy and his hilarious Redneck jokes. Now Patch Products brings his humor to the board game shelves. You're a redneck. Start in your trailer and go through town, collecting "redneck" things like a bag o' jerky and a hound dog to bring back home. If you're the first redneck to collect everything and return to your trailer, you win. On each turn you pick from three choices that correctly complete one of Jeff Foxworthy’s redneck jokes. Sample Questions: You might be a Redneck if... you wash your car more often than you wash your _____. 1. hair 2. kids 3. clothes You might be a Redneck if... your mother doesn't put on _____ to go grocery shopping. 1. makeup 2. shoes 3. a bra Dumb luck plays a role, too. If you land on a Dumb Luck spot, you must draw a card and may be required to do any of 30 different things, such as give up one of your treasures, or perform a Redneck stunt like hog-calling. A flip of the Redneck coin each time you encounter Dumb Luck decides if you will be the recipient of the Dumb Luck, or if you must force it upon one of your fellow Rednecks. Jeff Foxworthy's You Might Be a Redneck If... Game is for 2 to 4 players ages 16 and up. (Answers to the clues: kids, shoes.) Foxworthy is the largest selling comedy-recording artist in history, a multiple Grammy Award nominee and best selling author of 13 books. He starred in The Blue Collar Comedy Tour movie and the follow-up DVD, The Blue Collar Comedy Tour Rides Again. He also stars in and executive produces the WB hit television show "Blue Collar TV" and hosts a weekly country countdown radio show, The Foxworthy Countdown.