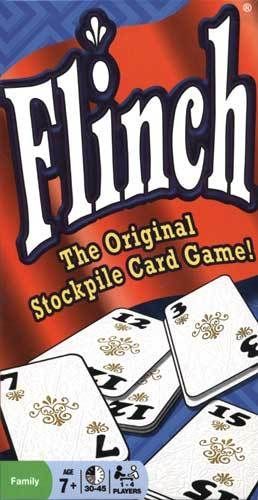 Flinch is played with a deck of 150 cards numbered 1-15. Players are allowed to play cards in sequence (building up from 1 to 15) to piles formed in the center of the table. "1" cards must be played to start the piles, but others may be played or held at the player's discretion. Cards may be played from a number of sources: a player's hand (five cards to start), a player's "game pile" (a stack of 10 cards of which only the top card is face up and playable), or a player's "reserve piles" (whenever a player passes or completes a turn, they must add a card from their hand to their reserve piles - up to five reserve piles may be formed). Hands are continually replenished with new sets of five cards during the game. The object is to play all 10 cards from game pile to the center of the table. Similar to: Pass PÃ¥