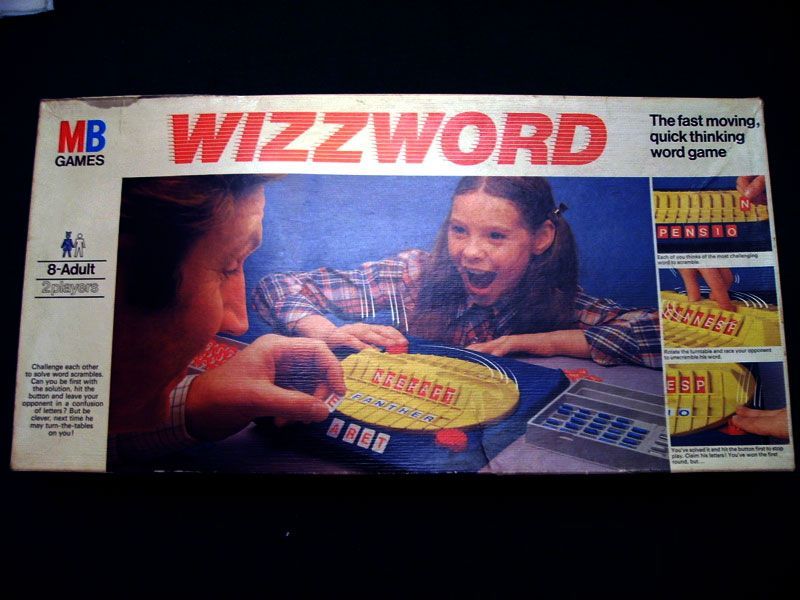 "The fast moving, quick thinking word game" "Challenge each other to solve word scrambles. Can you be the first with the solution, hit your button and leave your opponent in a confusion of letters? But be clever, next time he may turn the tables on you!" A simple anagram solving game with a twist, the board spins 180 degrees at the press of a button. The main game component is a large and sturdy plastic board with a rotating central section triggered by either of two chunky red buttons in the corner of each side. Also included are two plastic trays containing an assortment of letters in two colors, in my edition (blue on white / white on blue and red on white / white on red). German umlauted versions of A,O and U are also included. Each player secretly composes a word of up to 10 letters in their home rack on the stationery part of the board, then transposes the word into the upper rack of the yellow turntable. The turntable is then rotated and each player races to place their other colored letters in the middle rack to try to solve the anagram. The first player to solve the anagram presses their red button and presents their answer to their opponent. If correct they win if wrong they lose. The winning player claims the tiles used by the loser at the end of each round. Play continues until a player is unable to solve a word with their available letter tiles. A good educational game designed to expand your child's vocabulary and improve their mental agility with a tiny amount of strategy in word selection. The only flaw with the game is the overly enthusiastic rubber band powered mechanism, which when activated, scatters both sets of tiles.