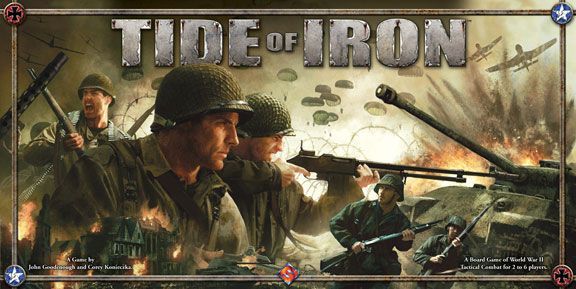 Tide of Iron was released by Fantasy Flight Games in 2007. Tide of Iron: Next Wave was released under license by 1A Games in 2014. Even though Tide of Iron: Next Wave is essentially a second edition of Tide of Iron, things are a bit confusing here on BGG since the two games have separate Board Game Links. For more information about the newer 2014 version of Tide of Iron: Next Wave, you can Click Here. Tide of Iron is a game of World War II tactical conflict for two to four players. The components in this base game allow players to simulate the dramatic struggle that took place between American and German forces in Northern Europe during the years 1944 and 1945. Tide of Iron is a scenario-based game, with the available forces, objectives, map, and victory conditions being set by each given scenario. It features loads of plastic figures, including soldiers, equipment, heavy weapons, and combat vehicles, cards, dice, cardboard markers, and modular game boards that will represent the customizable terrain of this scenario-based wargame. The twelve double-sided map tiles, plus the dozens of included terrain hexes, allow for limitless potential combinations, and each scenario can be enhanced by special rules, objective markers, troop allotments, and other variations. The only limiting factor is your imagination!