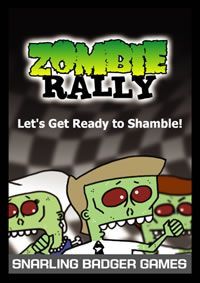 From the publisher: Unbeknownst to most living humans, zombies enjoy the competitive atmosphere of racing. Frequently shown in movies as masses of undead seeking nourishment, these zombies actually depict a group participating in a no-holds-barred zombie marathon. At other times, it's just another example of humans intruding in a private sporting event at a local graveyard - just a couple of zombies trying to improve themselves by reaching the ghoul-line. After all, what self-respecting zombie doesn't dream of becoming a ghoul? Zombie Rally depicts zombies at their competitive best. Zombie Rally is a non-collectible card game of zombie foot racing to two to six players ages 10 and up. It includes 54 cards and instructions. You will probably need a pen or pencil and some sort of scrap paper to keep score. Games can last from 15 minutes to an hour, depending on players.