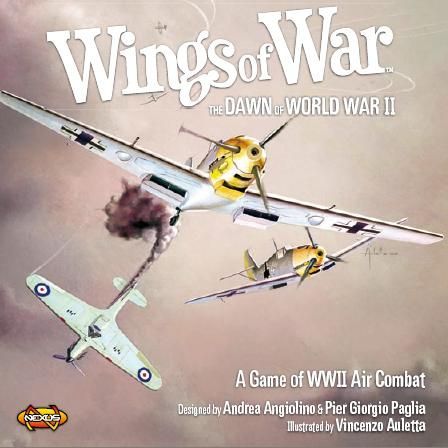 1939. The German war machine starts steamrolling over Europe. Earth and sky are aflame with battles. It’s the dawn of the largest war fought by mankind, and supremacy in the air can mean victory or defeat. The WW2 series of Wings of War is an easy, fun to play, fast and furious system which previous fans of the game will be able to start playing minutes after opening the box! New game mechanics support a simulation which must encompass planes with very different flight capabilities and firepower, while still keeping the flow of the combat simple as it is in the WW1 series. The innovations to maneuver cards and to the fire deck system provide all the needed historical accuracy with no headaches to the players! “Dawn of War” is the first set in the new series of Wings of War games, which will allow you to re-create dogfights, bombing missions, escorts, and endless other aerial combat situations set in World War Two. Including fighter planes from the first years (1939-1941) of the war, but also used later in the conflict, “Dawn of War” provides the foundation for a new, exciting evolution of the Wings of War system. Pilot a Spitfire, a Messerschmitt, a Hurricane, a Wildcat, a Zero... Up to 6 planes can fly with the contents of this set, for scenarios with 2 to 6 players. Part of the Wings of War series Re-Implemented by: Wings of War: WW2 Deluxe set Wings of War: WW2 Airplane Packs Wings of Glory: WW2 Starter Set