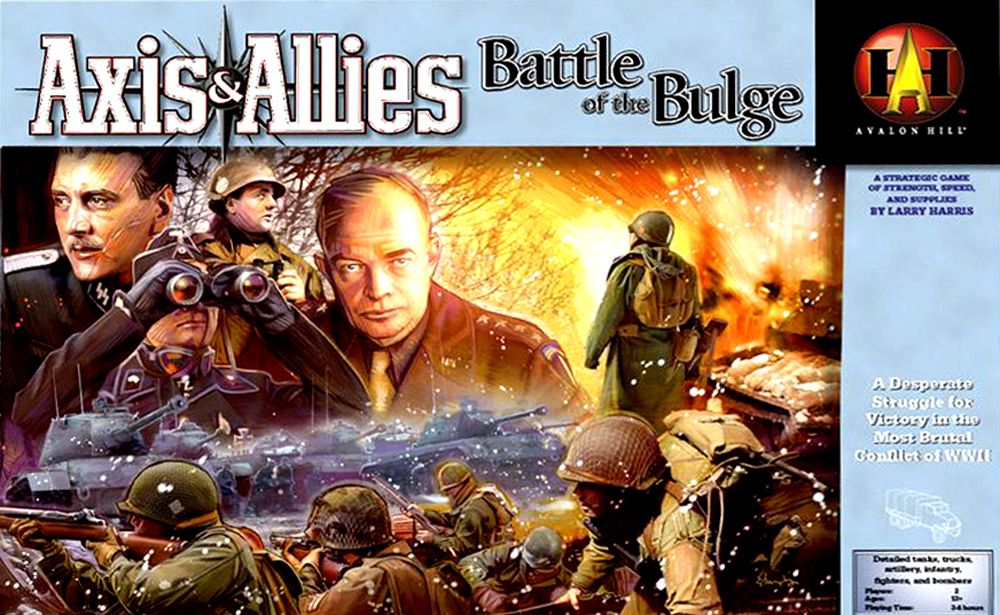 From Avalonhill web site: German tanks thunder into the snow-covered Ardennes forest, opposed only by a few unsuspecting divisions of exhausted American troops. As Axis forces plunge into the countryside, Allied troops must struggle to hold the front line in order to repel the all-out offensive. Axis & Allies: Battle of the Bulge challenges you to control territory and contend with supply shortages, while directing infantry, artillery, tanks, and aircraft in one of the most decisive conflicts of World War II. Scheduled for release in November, 2006, Axis & Allies Battle of the Bulge will feature detailed game components including a new truck piece, a hex-based game board with new original artwork, and original artwork commissioned exclusively for the Battle of the Bulge game box. Other elements of this new Axis & Allies variant include crucial elements that were key factors in the historical battle, such as supply shortages and late-battle air support, mechanics for overland vs. road movement and randomized casualties of war Axis & Allies depicts Wacht am Rhein (Watch on the Rhein), the German code name for this counteroffensive that took place toward the end of World War II. The objective: to capture the port city of Antwerp. It was expected that the capture of Antwerp would cause a great disruption in the flow of Allied supplies, and also have the effect of breaking apart the great Anglo-American alliance. One player controls Germany, whose massive build up of forces have gone undetected by the Allies and are poised to unleash all their fury on the Allies. The other player controls the forces of the United Kingdom and the United States and they must stem the tide of German armor and hold their positions until reinforcements arrive. Axis & Allies Battle of the Bulge is designed for two players and can be played in three to four hours. Axis & Allies Battle of the Bulge is the fourth Axis & Allies variant, following the successful Axis & Allies D-Day, Axis & Allies Europe and Axis & Allies Pacific versions. Axis & Allies Battle of the Bulge is available on November 17th, 2006. Box Dimension: 15.8 x 10.5 x 3