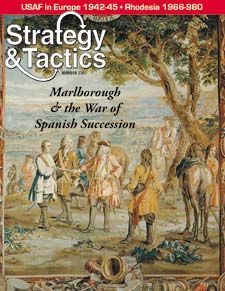 Marlborough: War of the Spanish Succession ("Marby," for short), is a wargame of intermediate-to-high complexity, designed by Joseph Miranda, simulating that critical conflict of the early 18th century. The dynastic struggle began when France's Louis XIV attempted to place his grandson, Philip IV, on the throne of Spain. The other major powers saw that as a threat, and so supported their own candidate, Charles III. That in turn began over a decade of fighting that grew into a general struggle for domination over all of western Europe. Marby is a two player game. One controls the forces of France and its allies, known as the Bourbon coalition, after the ruling house of France. The other player controls the forces opposing France, led by England and Austria and known as the Grand Alliance. Each player has a variety of military, diplomatic and economic instruments with which he can attempt to win the game by controlling states and economic centers. The game includes several scenarios. Shorter scenarios represent critical parts of the war, while the "Grand Design" scenario covers the entire war. Certain rules are designated "optional," and the players don't have to use them. The optional rules are suggested for use only when playing the Grand Design scenario, as they add considerable complexity, historical detail and playing time. The 34x22" large-hex map shows western and central Europe during the early 18th century. The grid of hexagons printed over the map provides locations for playing pieces and geographic features. During the game, the cardboard pieces are placed within individual hexes. Each game turn represents one year; each hex scales to 50 miles. Each army represents 10,000 to 20,000 soldiers and support personnel, camp followers, etc. A leader represents that person plus his guards, entourage, lackeys, wine cellars, etc. A fleet represents 60 warships and an indeterminate number of transports. The rules run to some 17,000 words, making for play sessions lasting from four to 12 hours.