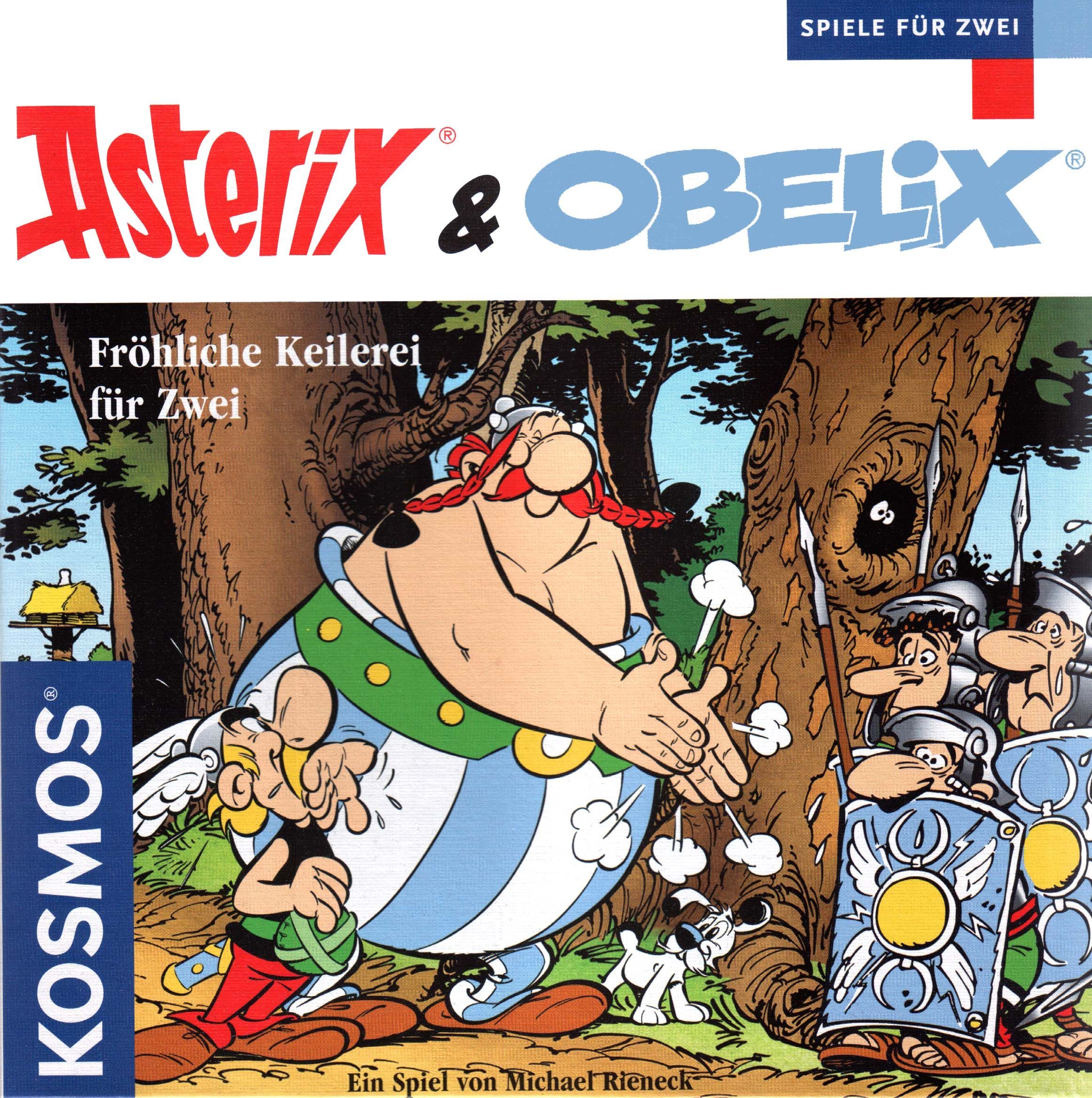 This is a game in the Kosmos two-player series. Description from Kosmos: In this two-player game featuring Gallic heroes Asterix & Obelix, the occupying Romans wear the usual costume for those stationed here: bumps and bruises. New Roman overseer Zenturio has let the money-hungry Gallic chief Moralelastix convince him to mount an operation against his little village. As usual, the question isn't "Will the Romans get beat up?", it's "How badly will the Romans get beat up?" The two players play as Asterix and Obelix. Each takes the matching playing figure as well as a set of 15 beating cards (3 cards in each of 5 different colors), which he places in front of himself as a face-down deck. Each player takes the top 5 cards in hand. In addition to the beating cards, there are Roman cards. Most of them show Roman Legionnaires (in 5 different colors), but there are also Pirates, Wild Boars, the traitor Moralelastix and 5 Village Feast cards. The 40 cards are well shuffled and placed as a face-down pile. Then, the top 16 cards are drawn and placed face-down on the table in classic Phalanx formation (4x4 grid). The remaining cards act as a draw pile. The player with the longest mustache (or alternately the biggest belly) begins. He places his figure in front of one of the four Phalanx rows and turns the topmost card over. A red Roman! Red Romans can only get beat up by Red beating cards. If the active player doesn't have any, then the Roman card is turned back over again and that player's turn is over. If he does has a red card, though, then he has to choose whether to end his turn (taking the beaten Roman as a trophy) or turn another card over, hoping to press his luck. A player can keep going until (in an extreme case) he's cleared an entire row of the Phalanx. In that case, the active player gets to refill his hand to 5 cards and then start in on another row. Of course, that may not be such a good idea. Because if he keeps going and finds a Roman card he can't beat up, then his turn is over and he receives nothing. All of the Romans he would have won are removed from the game instead. Players can reduce the luck a little bit, in that they can discard one card from their hand to look at the last card in the row where they placed their figure. When a player ends his turn (freely or because he was forced to), then he refills his hand to five cards and it is the other player's turn. Any holes in the Roman Phalanx are also filled back in with cards from the draw pile. Lastly, the player whose turn just ended gets to block the next player from trying one of the rows (either horizontally or vertically). Of the 40 Roman cards, only 30 show actual Romans (as well as Zenturios himself). The remaining 10 cards are: 3 Pirates, 1 Wild Boar, Moralelastix, and 5 Evening Feasts. Pirates are easy to beat: Any card will do. To get Moralelastix, two cards of a single color are needed. The Wild Boar ends the player's turn immediately, but he gets to keep the Romans he beat up on so far. If a Feast is revealed, nothing happens and the player gets to keep going. Revealed Feasts are set aside, and once the fifth Feast shows up the game is over. Now, the players count their victory points. The purple point goes to the player who got Moralelastix. A brown point is for the most pirates. The majorities in the five Roman colors are worth the red, blue, yellow, green and black points, respectively. The player with the most victory points wins.