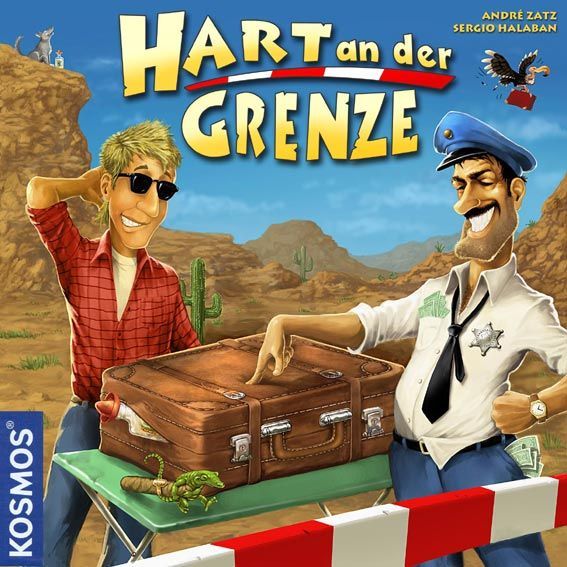 In Hart an der Grenze (Close to the Border), players are people trying to cross a border with luggage full of legal and also illegal goods. Each one declares what he is carrying, but of course he only declares what the law allows (even if it means telling a lie). Each turn one of the players takes the role of sheriff. The sheriff must choose who to spot check. In case the sheriff picks someone whose luggage does not have exactly what was declared, the person must open the luggage and show his goods. The not-declared goods are lost and a fine is paid. However, before opening the luggage, the person may always suggest that the sheriff take some of his dollars so as to be kind and let him pass. If they come to an agreement, good for them! During the whole game, players may also stock goods for the end, when the border is closed and the price is doubled. But only a limited amount of each good can be sold at this time. And the bigger traders in each kind of good will have the advantage of selling first. To sum up, Hart an der Grenze is a game with bluffing, negotiation, strategy and a lot of good laughs. Re-implemented by: Robin Hood