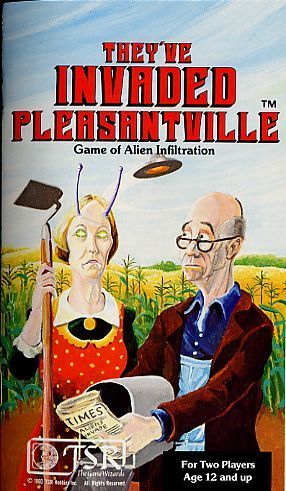 Part of TSR's minigame series. From the rulebook... "They've Invaded Pleasantville minigame is a two player game of secret invasion by space invaders. One player, the Alien player, moves the Alien-controlled and uncontrolled pieces, and the other player, the Town player, moves the Town-controlled pieces. There are 12 game turns in this game. In any given turn, playing pieces representing various townspeople will be moved across the gamemap, which is a map of Pleasantville. The Alien player will try to keep the whereabouts of the Alien-controlled townspeople a secret, while he or she "takes over" more unsuspecting townspeople and builds up strength for the final showdown with the Town player. The Alien player, in short, will try to create a large army of townspeople-zombies, eliminate any opposition, and occupy Pleasantville as a base of operations. The Town player will try to convince the townspeople that there is an alien menace in the town, and will attempt to fight any Alien-controlled townspeople encountered. With luck and careful play, the Town player hopes to defeat the Alien-controlled"zombies", locate the Alien Headquarters, and destroy the Alien Sub-Commander." The game mechanic involves use of two identical sets of carboard chits - one set having a star on the back indicating alien control. Each turn, the alien player may use misdirection and bluffing to fool the town player as to where the alien mind control is taking place. Real townspeople are "swapped out" with alien controlled ones and the town player must stop the spread of control sooner than later. A fun game for two players who enjoy bluffing and like simulating the action of classic movies like Invasion of the Body Snatchers and Invaders from Mars. Especially entertaining is the random Townsperson Movement table that simulates the day to day migration of unsuspecting townspeople as they go about their business in Pleasantville.