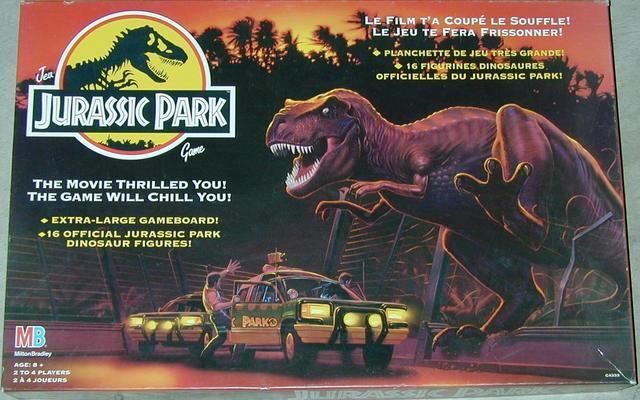 Based on the first movie, of course. This huge Milton Bradley box contains an over-sized board with a rather flimsy Visitor Center building; stand up cardboard pieces for the various movie characters, and a bunch of plastic miniatures of the more dangerous dinosaurs (a T-Rex, Velociraptors, and Dilophosaurus). You start off at the other end of the island and try to make it to the Visitor Center. There are some safe spaces on the board (maintenance sheds) that allow you to refresh your hand of cards as a bonus. Cards allow you to move, move faster along the road, escape a dinosaur or cancel another player's card. On your turn, you roll dice that indicate which dinosaur you may move. You then move yourself one space, play a card or trade in cards. The dinosaurs don't kill anyone (unlike in the movie!) -- they just pin you down until the dinosaur is moved away or an escape card is played. Although the box says 2-4 players, there are pieces for up to 8, which leads to a lot more mayhem (but a longer game).