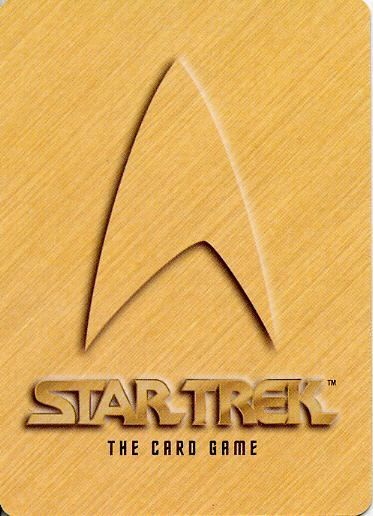 This CCG is based on the original series. Each player plays with the same core crew cards in the middle of the table. These cards, Kirk, Spock, McCoy and the Enterprise, are in every starter. This is a blessing in that most CCG's make the most popular characters very rare. The game can be multi-player but is designed for and best with only two players. Each player takes turns being the "Current Player": the crew of the Enterprise, while the opposing player represents the obstacles to the crew as the "Challenging Player". The game revolves around completing episodes as the Current Player. Each episode is made up of three cards, Mission, Plot and Discovery. You have all three cards in a generic form that you can play if you did not draw one of the types. You play a mission card then the opponent plays challenges against it. You then play a plot card and more challenges. Then a discovery card and yep, more challenges (well… really you just resolve any outstanding challenges). At the end each side gets points called XC for how they did or did not do during the Episode phase. The Current player gets XC for completing the episode while the Challenger gets XC for stifling the Current Player's efforts. XC is put on the core crew and crew you enter on your side and the first player to end their turn with 25+ XC total on the crew wins. This means that XC on the core crew will count for each side when it is their turn. The shots from the series used on the cards will make Star Trek fans very happy. My favorite card - Shirtless Kirk. There is also an expansion for this game. See here http://boardgamegeek.com/filepage/18487/starfleet-manuevers-checklist-xls There were also 6 additional cards, that were chase cards from the Star Trek Phase 3 trading card set. These were not available in either expansion! See also the 1994 release from Decipher Star Trek: Customizable Card Game (first edition)