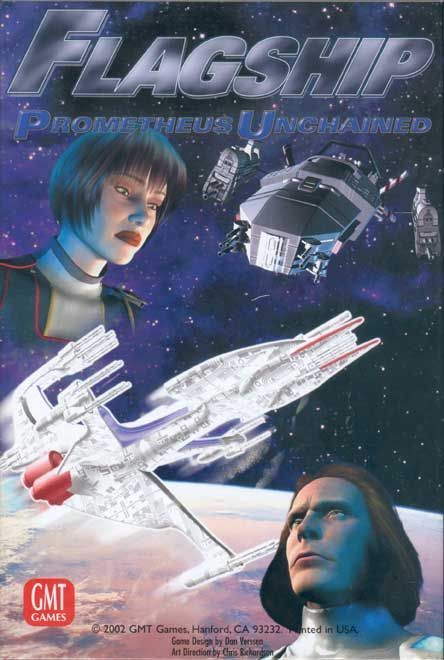 Flagship is an easy-to-learn, fast-paced, card game of tactical starship combat. The four galactic races are the Heisenberg Dynasty (Blue), Freeman Followers (Green), Nation's Pride (Yellow), and Kirikin Swarm (Purple). The former two are available in the game: Prometheus Unchained, while the latter two are available in the only released expansion: Flagship: Coyote Stands. In a basic tactical skirmish scenario, each player chooses a race and uses a point system to select their fleet, which must include a Flagship and a Commander. Each player chooses how to align his ships (think rows, similar to Modern Naval Battles), while considering their ship's optimal firepower: Direct and Boarding (typically) at range 1 or Guiding at range 2. Game ends when one player's Flagship is destroyed. There are other scenarios available with different victory conditions and formats of gameplay. Integrates with: Flagship: Coyote Stands