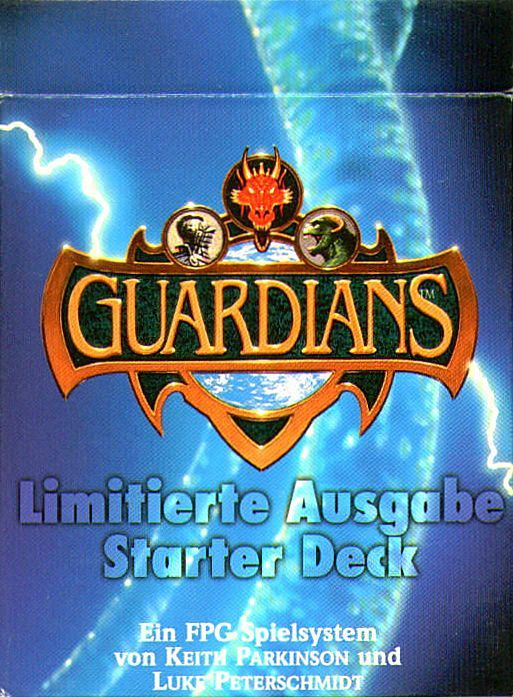 This CCG plays more like a board game than a card game. Each player starts with a Guardian, a very powerful creature with special abilities. In front of the Guardian you place a set of 3 stronghold cards. These are locations that give you bonuses. In front of these are 3 empty spaces that terrain cards will be placed. These will match up to the other players 3 empty spaces thus creating the board. Onto your stronghold you can place creatures under a shield to keep them hidden. Only creatures under a shield can move and they can move up to 2 spaces with some restrictions. There is a limit to what can be put under the shields so you can not make your army too big. When two armies met they battle. Combat is fairly detailed. Both players pick up their cards from under the shields to make a combat hand. Each player secretly chooses one creature and they are placed down on the table. The stronger then covers the weaker. This is repeated for each creature until only one player has creatures left in his hand. He can then assign these creatures to help any of the previous creatures placed. There are many modifiers involved and each stack of creatures must be checked for a winner. All losers are discarded. After determining each battle the total strength of each army is checked. The weaker army must then retreat or the attacker in case of a tie. To win you must either control all six of the lands between the strongholds, destroy 5 of the opponents shields or destroy the opposing Guardian. The game is fairly complicated but very straight forward. Special mention must be made of the artwork. There is no better looking game on the market. The illustrations are large and very well drawn. Humor abounds. After the first release, a revised edition was published ('Guardians Revised Edition'). The game has three expansions, namely Dagger Isle Drifter's Nexus Necropolis Park Online Play CCG Workshop (no longer available)