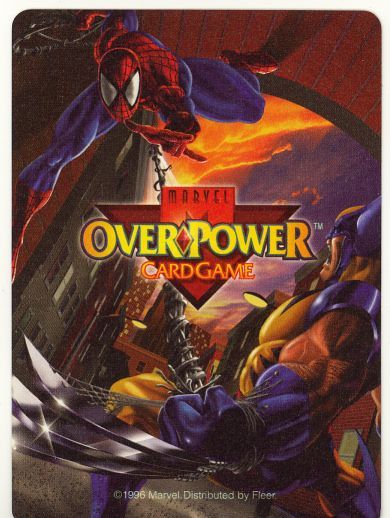 This defunct CCG is primarily based on characters from Marvel comics, with DC and Image comics represented in later expansions. Each player has a team of 4 characters, each rated in 3 or 4 skill types. At the beginning of each hand, each player makes a wager of some of their 7 mission cards based on how confident they are that they can "win" the hand by causing the most damage. Players then take turns playing a card from their hand or cards set aside from previous hands. Cards include Power cards (basic attack or defense in a skill type), Universe cards (e.g., a city bus, which adds value to a Strength attack), Special cards (usually character specific with varying effects), and more in later expansions. At the end of each hand, the damage from that hand is totaled; the player who caused the most "completes" their wagered missions, while the other player is "defeated" with those missions. Players may concede a hand instead of playing a card, losing their missions but avoiding further damage A player wins when they have knocked out all 4 opposing characters, "completed" all of their missions, or their opponent is "defeated" in all missions. (There is also a basic game option without the use of missions or conceding, in which the sole victory condition is knocking out the opposing team.)