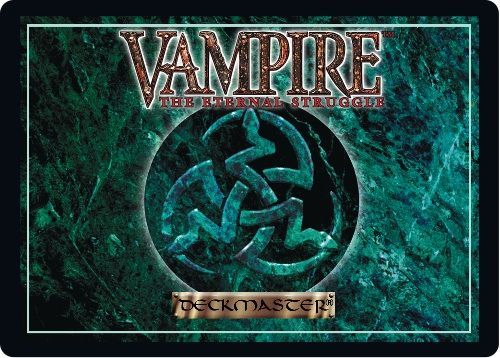 Vampire: the Eternal Struggle (or VTES for short) is a multi-player collectable card game based on the award-winning Vampire: the Masquerade role playing game in which players take on the role of ancient vampires known as a Methuselahs. Considered mere legend by many, Methuselahs rule everything from the shadows, engaging in a eons-long Machiavellian conflict that encompasses political, social, and even physical warfare. The struggle is won or lost based on the actions taken by your minions – younger vampires who unknowingly do your bidding. In this way, the game can allow for deep and immersive storytelling as your minions purchase equipment, hire retainers, even suggest legislative changes to vampiric society, all in the service of your dark plots. VTES was the second card game designed by Richard Garfield (designer of Magic the Gathering, Netrunner, and other games). It was designed to avoid some of the flaws that Garfield found in Magic: VTES does not require you to include resource or mana cards in your deck, and cards are instantly replaced when played, meaning that card draw isn’t as important as knowing when to discard a card to sculpt a better hand. It also has a gameplay experience more in keeping with a boardgame than a traditional card game – VTES is usually played by 4 or 5 players and games can last up to 2 hours. Unlike most multi-player games, players in VTES do not engage in a free-for-all. Each player directs their attacks to the player on their left (their “prey”) and defends against the player on their right (their “predator”). You gain victory points by eliminating or “ousting” your prey from the game, in which case the next player to the left becomes your new prey. The player with the most victory points at the end of the game wins (even if they have been ousted!). This arrangement makes the game a very social one – you and the player two seats to the left and right have common enemies. But if you help these allies too much, you may find that you’ve made one of them too strong, and when they suddenly become your new predator, your help has transformed that ally into a deadly threat. VTES is also a resource management game. Each player begins with 30 points of influence called “pool” that Methuselahs hold dearer than unlife itself. If you run out of pool, you are ousted from the game. But this pool is also the way that you sway vampires to your cause. Each turn you have the opportunity to spend your pool to seduce a vampire. Weak fledgling vampire are easily swayed, but the older more powerful ones require convincing, which may require multiple turns to accomplish. Once a vampire is converted to your side, all the pool you spent on them becomes blood possessed by this vampire, which can be spent to play cards that allow them to activate their unique vampiric powers. Each minion must manage their blood and you must manage your pool – spending more provides you with additional minions, but brings you one step closer to being ousted. Under- or over- investing in your minions may well cost you the game. Vampire: The Eternal Struggle has risen once again from torpor! White Wolf has granted Black Chantry Productions license to print new cards! Details are still forthcoming as to what to expect. Go to http://www.blackchantry.com for the latest details. The game is also supported by Vampire: Elder Kindred Network™, the official player organization responsible for sanctioning and regulating VTES tournaments, recording V:TES players’ ratings (and rankings), as well as designing and releasing new digital expansions featuring profession artwork. Go to their site at www.vekn.net to check out what's new with the game!