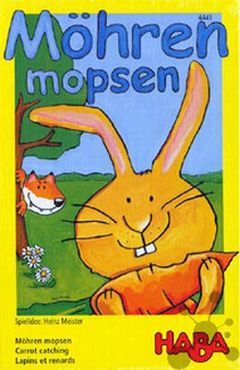 Small cards are laid out face down on the table picturing either a Rabbit (always face down) or a Fox (initially face up) , Foxes in a circle, Rabbits inside that circle. Play : - If a player is sure to uncover a Rabbit, he can do so and earn a Carrot if he´s right. In that case he also takes a Fox card, turns it face down and replaces the Rabbit card (which is discarded) with it. - Otherwise, he can throw the dice. According to the result of the dice he gets a Carrot (for free), or has to pick either a Fox or a Rabbit from the face down cards, which earns him a Carrot if he gets it right. Player with most Carrots wins. Alternate names : "Carrot Catching", "Lapins et Renards"