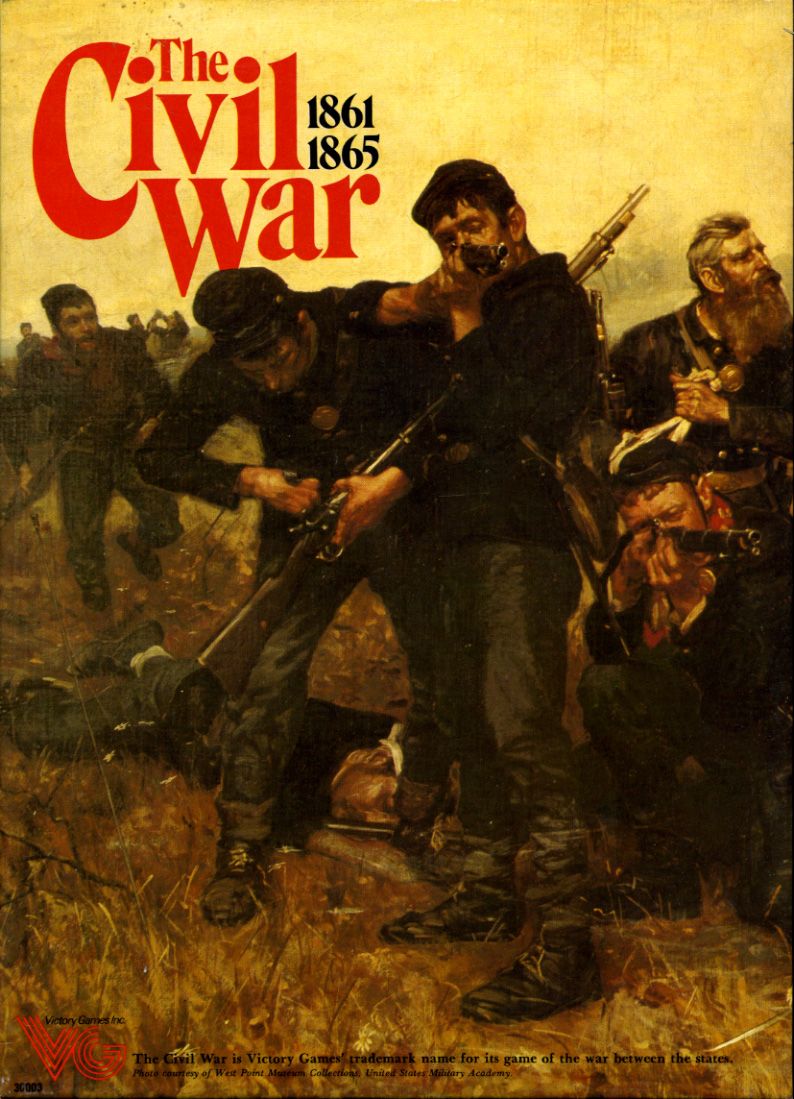 This sprawling rendition of the American Civil War tries to fit in everything, from Grant and Lee down to Indian raids in the Western territories. It also includes the most extensive treatment of naval and riverine warfare of any strategic Civil War game. The map covers the theater of the war from the Eastern seaboard to the middle of Texas at 25 miles per hex. An optional second map extends to New Mexico. There are five turns per year, four of two months each and a four-month Winter turn. Each turn consists of an indefinite number of "pulses" and may last a long, long time. Troops are represented by generic Strength Points (about 5,000 men per SP, or one or two ironclads with escorting naval vessels). The key concepts in the game are Theaters, Command Points, Pulses and Leaders. There are three Theaters: East, West and Trans-Mississippi. Players must prioritize them each turn as primary, secondary and tertiary. These designations are made a turn in advance, requiring a modest degree of foresight. Higher priority Theaters receive larger allocations of Command Points and thus will see more activity. Command Points are needed to perform most of the game's functions, such as moving SP's, consolidating SP's into Armies, constructing fortifications, adding naval SP's, sacking unwanted generals, etc. Players obtain them by dice rolls at the start of each turn. In addition to CP's assigned to individual theaters, they receive an allotment of "discretionary" CP's that can be used in any Theater. The Union also gets Naval CP's. Additional CP's may be generated during a turn, as noted below. Each turn is divided into an indefinite number of Pulses. To begin a Pulse, each player rolls two dice. The difference between the results is the number of actions each must take in that Pulse (high roller first). Actions may be used to expend Command Points, to muster SP reinforcements or to bring inew or newly promoted Leaders into play. If the dice rolls are equal, either the turn ends immediately or each player receives additional Command Points. The likelihood of an immediate end rises with the number of tied rolls and is a certainty on the fourth tie. If the turn doesn't end in this fashion, it continues until all Command Points have been used and available reinforcements and Leaders entered. While Strength Points are abstract, the game includes more than 60 historical Leaders, who enter play at about the time that they rose to prominence in real life. Each Leader has a rank (one to four stars) and ratings for Initiative, Tactical Combat and Army Command. Many begin at lower ranks and can be promoted. Sherman, for instance, has a single star when he appears but can rise to four. Like Presidents Lincoln and Davis in real life, players don't have absolute control over promotions, nor does every Leader perform better at a higher rank. A Leader's rank determines the number of SP's he can command - up to two for a one star, up to six for higher ranks. Assigning as many SP's as permitted to a Leader (preferably a capable one) is economical, since he can move his entire force by expending Command Points equal to his Initiative. (Lower Initiative numbers are better in this game.) Without Leaders, SP's cost one CP each to move, rendering them all but static. Better yet are Armies, which can be as large as 25 SP's and must be commanded by a three or four star Leader. (Each Army has its own maximum size, based on its historical counterpart.) The game has much more: an elaborate combat resolution procedure, somewhat less elaborate supply rules, a naval system that is a game in itself, cavalry, railroads, militia, neutral states and a chrome-laden option to add the Far West map and Theater. Players gain Victory Points primarily by capturing major enemy and neutral cities and winning neutral states to their side. The South also gets VP's for successful commerce raiding and for isolating or capturing Washington, D.C. It wins at once if it captures Washington at a moment when it has more VP's than the North. Otherwise, VP's are checked in November 1864 and April 1865, when the game comes to a definitive end. For those who lack time or patience for the full war, scenarios are provided with the historical setups as of the start of 1862, 1863 and 1864. The Civil War isn't the biggest game ever produced on that dreadful conflict, but it is certainly among the most ambitious in its scope and degree of detail.