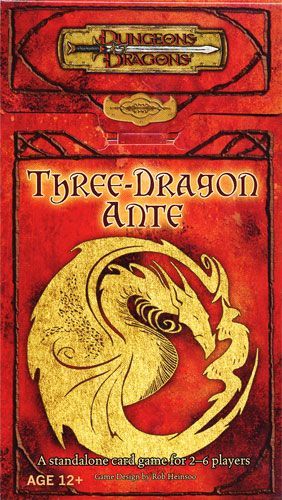 Three-Dragon Ante is a fast-paced noncollectable card game based on the games of chance played by characters within the D&D game world. Three-Dragon Ante can be played as a standalone card game, or it can be played as part of a roleplaying campaign-where the abilities of each player´s character give him or her a unique winning edge. Three-Dragon Ante is a force-bid game where the pot goes to the player who built the best dragon flight this round. Each turn you play a card into your "flight", and if equal in strength or weaker than the dragon played by the prior player, that dragon's power activates (draw cards, take cards from opponents, steal from the pot, etc). Game ends once one player goes bankrupt. Integrates with: Three-Dragon Ante: Emperor's Gambit Expanded by: Luck of the Draw (RPGGeek item)