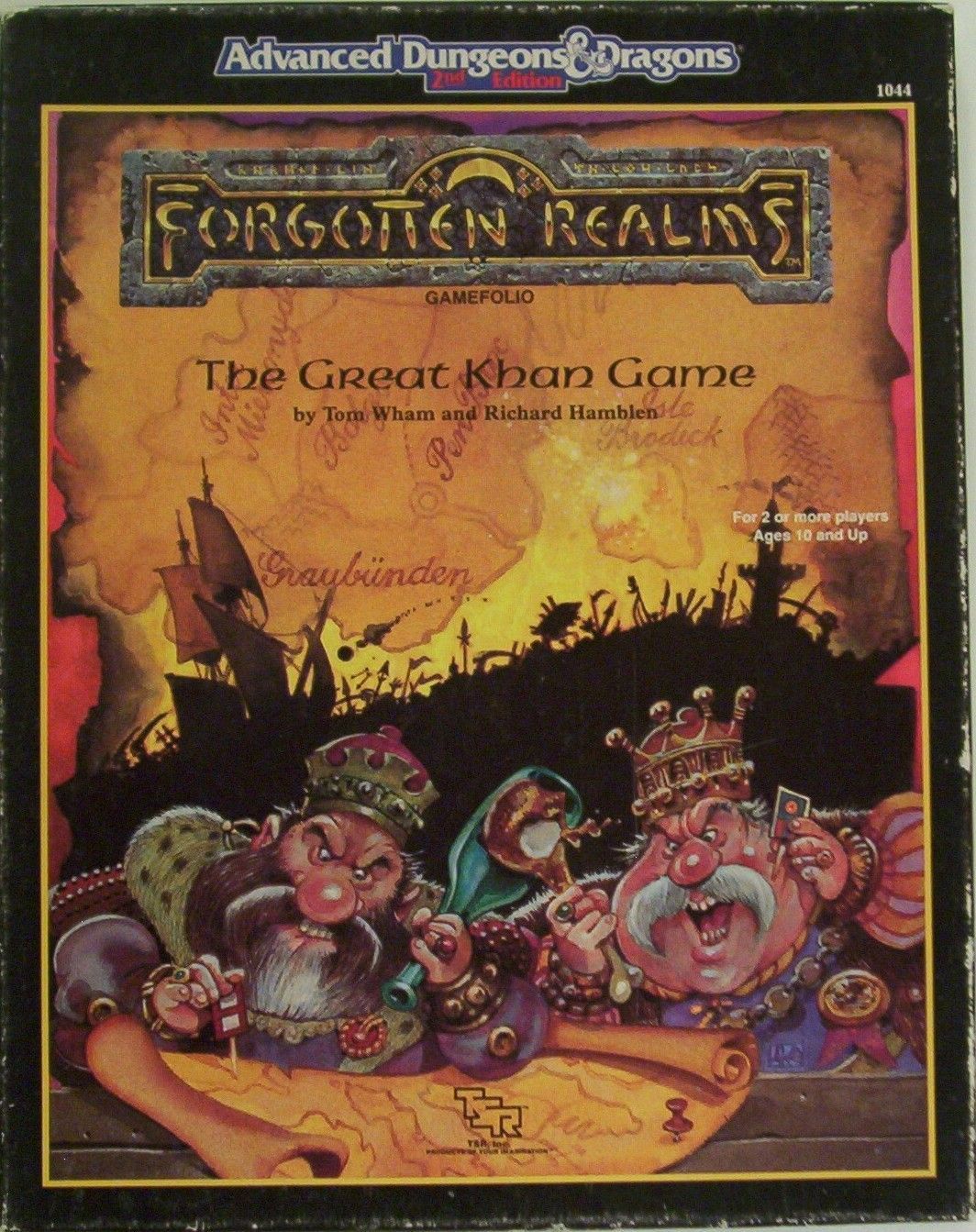 The Great Khan Game includes one 32-page rule book, one 11" x 17" full-color map of the Whamite Isles, 120 die-cut cardboard playing pieces, 162 playing cards, and one plastic storage bag. This is a card/strategy board game for 2 or more players. The game is set in the Whamite Islands. It is a very fun game, which usually lasts an hour or so depending on the number players and chance. The idea of the game is to make as much gold as possible by controlling countries within your own little empire from the dozen or so provinces available. The game uses a card system with a lot of clever design tricks added on to provide depth. The game play within your turn is easy to pick up, but requires much thought to get right. You are dealt six cards initially, which will usually give you weak control of a couple of countries. These can be added to each turn by drawing two free cards or taking the top card from the discard pile. Additionally, you can buy extra cards every turn. Having checked the cards for events and acted on those immediately, you can make 'melds,' war and political manoeuvres before compulsorily discarding one card. The heart of the game is the 'meld.' A meld is simply the act of laying one or more cards from your hand in front of you, thus activating their powers. By having the most powerful political meld on the table (determined by the total number of flags on the melded cards), you control that country until toppled by better politics or combat. Each country normally has a couple of leaders, often with low numbers, and a varying number of higher-numbered followers who might be loyal to any leader card or just one. Power can be stolen in two ways: political coups where you lay more flag cards than are currently melded (you take over those cards as well - those willing rally to your cause), or by the time-honoured invasion force. Combat is simple enough, but can prove a little fiddly at times. Once battle is joined, a d6 is rolled to see how many rounds the battle will last. Rolling a one when there are two large armies will virtually guarantee a non-result, whereas a six will give both sides a good chance of a win. Swords kill simply on a roll of five or six, castles get to 'fight' in defence, and defending ships must be beaten first. The game has an excellent basic structure. The key to the game is the balance of military, political power, and wealth. It really works well. But, as always, there are improvements to be made and rules that can be changed to improve or change the flavor of the game. But, the reason why the game works well is that there is an excellent structure underlying the few contested rules. It's worth adding that a lot of the fun comes from the irreverent humour on the cards--just in case you thought you were playing a serious strategy game. Names are satirical, silly, or obtuse references to real world people, places or events. For example, there's a castle named "Ratlarbig" (look at it closely), a character called the "Sorcerer's Apprentice" and a group of soldiers called "The Bloody Buggers". It's a hoot whether you're winning or losing.