A Line in the Sand: The Battle of Iraq - Universal Statistics 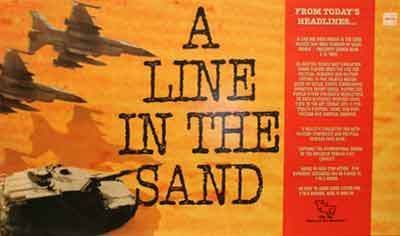 This is a game detailing the Persian Gulf War fought in the early 1990's. Many of the mechanics are similar to that of one of TSR's other wargames (Red Storm Rising) so players of that game can rather easily go to this game. Two versions of this game are played. With less than 5 players, the game is a "Basic Game" where military might is what wins the game. Players take sides, usually a combination of Middle Eastern nations plus the US. In the two player version, for instance, it is (quite predictably) the US & Allies vs. Iraq; in the three-player game "Holy War", it's Israel vs. Iraq (and Yemen and Jordan) vs. Saudi Arabia (and Syria, Libya, and Lebanon), and so on. Combat rules are rather straightforward, and wargamers will be familiar with many of the mechanics. Land (w/ infantry, Iraqi National Guard, and tanks), sea, and air units are all utilized. Most units can take a few hits before removed from the board. The Gameboard is big and beautiful. It has large areas denoting the nations of the Middle East, with some abstracted land to shore up the U.A.E. and some islands. It also has oil wells and airbases, as well as some other stuff. The *real* game, though, is the six-player diplomatic game. The players are now clearly defined: The US (NATO), Iran, Israel, Iraq/Yemen, Moderate Arabs (Saudi Arabia, Egypt, Kuwait, etc.), and Volatile Arabs (Jordan, Libya, etc.) This adds a crucial element of diplomacy and politics, and makes the game much more interesting than the normal wargaming stuff. A "War Fever" and "Jihad" marker change as nations do things--for instance, the first time a US unit is attacked outside of Turkey, War Fever "tripwires" to 10. If Israel attacks a neighbor, Jihad increases by 2. War Fever and Jihad permit certain things to happen--for instance, if War Fever gets too low, the US is restricted in whom they may attack. If Jihad hits either 1 or 10, revolutions may occur--which can switch entire nations to another player! Messages can be sent to other players via a diplomatic pouch--you cannot simply pull another player to the side and whisper in their ear. All messages, once read, go into a big pouch, and players can make diplomatic gestures to read some of the messages after they're read. Victory occurs, in any case, when you meet objectives, which can vary from player to player. "War Aim" chits are drawn before the game begins, and so players are not quite certain as to exactly what other players are going for. For Instance, Iraq may win if they capture and hold Kuwait for the last three turns; if Jihad has reached 10 at least once and 10 non-Muslim units have been destroyed (by anyone); or by controlling three more oil fields than they started with. It all depends on what they looked for. All in all, the Diplomatic game changes the basic game so much that political considerations are as important as military ones. A simplified version of the game with the same name appeared in the TSR comic Warhawks #3. Advanced scenarions for the game in the comic appeared in Warhawks #4.