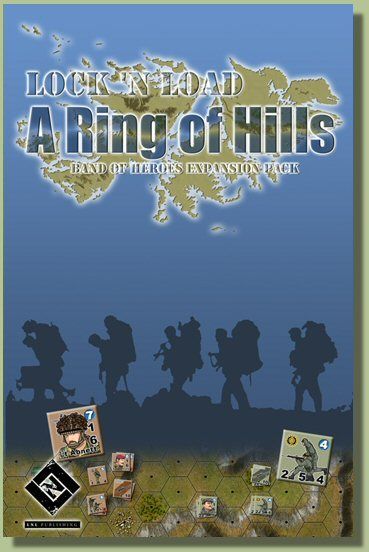 A Ring of Hills is an expansion to Band of Heroes. A Ring of Hills depicts the ground combat between the British and the Argentines in the The Falklands War of 1982. A Ring of Hills comes with 12 Scenarios, 5 gorgeous geomorphic maps, 170 counters, module-specific rules, and a player-aid card. The 12 Scenarios feature the combat from Goose Green and Darwin Hill, to the commando raid on Top Malo House, to the fight for the outer and inner Ring of Hills to the west of Stanley, including Two Sisters, Mt. Longdon, Wireless Ridge, Mt. Tumbledown and Mt. William. The initial seizures of Stanley and the island of South Georgia (a scenario that includes the Argentine corvette the Guerrico, the first Ship in LnL!) are also featured, as are two what-if scenarios that depict an opposed British landing at San Carlos and a last-ditch fight on the outskirts of Stanley. Accompanied by Harrier and Pucara Strikes and plenty of artillery, Argentine Conscripts, Marines and Amphibious Commandos take on British Paras, Royal Marines and Gurkhas for the bleak, windswept islands of the South Atlantic, in historical battles that fit perfectly with the LnL Tactical Gaming System. This game is no longer available, the new, improved and expanded edition can be found in Lock 'n Load Tactical: Heroes of the Falklands