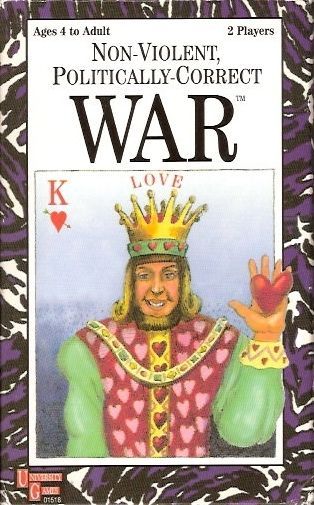 War has dramatically changed over the years, but the card game that bears its name hasn't until now. For the first time, War incorporates Love, Peace, Diversity, and Unity. Players compete to get rid of their cards first, while trying to avoid the heavily-armed Joker (the weakest card in the deck). The key differences between this game and standard War are: - The Joker is the lowest card in the deck - it loses to every other card. - When players put down cards of the same rank, instead of having a "war" right away, they cooperate and by trading decks, then have a war. - The first player to get rid of all his/her cards wins. The suits are of different icons (peace symbols, unity symbols, hearts with an arrow through it, etc) from a normal deck of cards and the deck includes one blank card which can be used to replace a lost or damaged card OR create a new wild card.