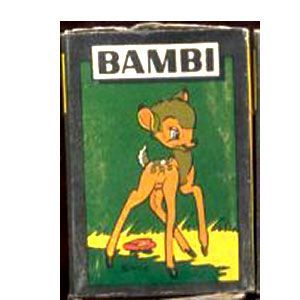 Players turn over number cards, highest gets to steal letter from another player. Try to collect letters that spell Bambi. Cards are divided into numbers and letters. There's four cards for each letter in Bambi's name. All letter cards feature a picture of Bambi. There are four copies of each number card. 1 features Flower 2 features Chipmunk 3 features Squirrel 4 features Thumper 5 features Birds 6 features Owl 7 features Bambi's Mother. Players select cards to spell Bambi. Number cards are dealt out face down equally to all players. Each player then turns over the top number card. The player with the highest number steals a card from another player. The round is over when all number cards have been turned over. Players are out when they have no letter cards left. Players score an increasing number of points for each Bambi they can spell with their letter cards. Play continues until someone reaches 100 points. All illustrations are copyrighted W.D.P. [Walt Disney Pictures] This is Volume 4 of a 6 Volume Disney Set of Card Games.