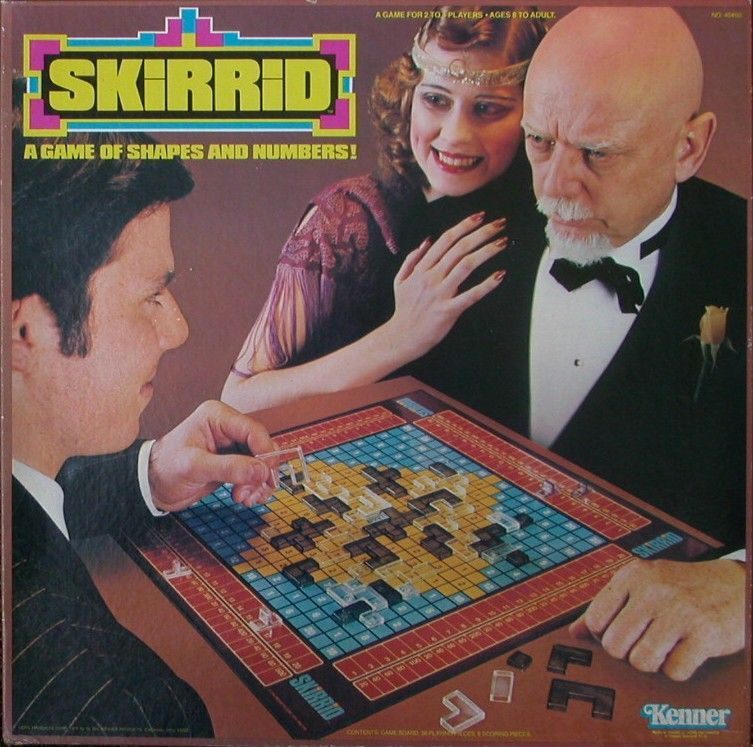 Coming in a very awkward-sized box (42 x 42 x 3 cm), this is a distant relative of Scrabble. The 19x19 board is colored in two distinct areas, the central lozenge (just reaching the edges) being called the arena. The squares are sprinkled with numbers, of values increasing near the outer corners. The players have sets of 18 (for the two-player game) clear and smoked plastic of tangram shapes, some of which have a 2 or 3 over a certain square. Starting in the center, the players lay their pieces so as to score, adjacent to an existing piece. A piece normally scores the numbers it covers; if it has a number of its own and that number falls directly over a scoring square, they are multiplied. You can sacrifice a piece by playing it upside down; it scores half (rounding down) and the opponent isn't allowed to play a piece adjacent to the sacrificed piece on his next turn --this is a neat trick when approaching a high-scoring area. You cannot sacrifice on the first turn. You cannot play outside the arena until you've accumulated at least 75 in score. Score is kept with the help of tracking pieces on the outside edges of the game board. The playing tiles come in six different shapes, each with their own name: The Eye (covers 1 square); The Rod (covers 2 squares); The Quoin or Corner(covers 3 squares); The Snake (covers 4 squares); The Door (covers 5 squares); The Gun (covers 6 squares).