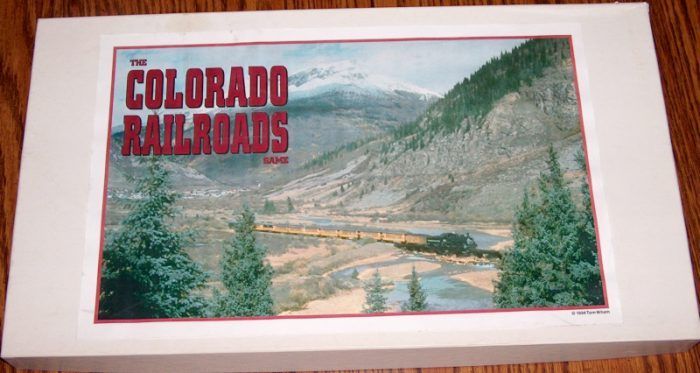 From the Introduction in the rules: On May 10, 1869, the Union Pacific and the Central Pacific met at Promontory Summit to establish the first transcontinental railroad for the United States. The route taken by the Union Pacific just grazed the tip of Colorado at Julesberg and headed west through Wyoming. Colorado, however, wanted railroads and soon got them. In the Colorado Railroads Game, players assume the roles of the big financiers who put together the rails that roamed the Rockies. Somewhat in the tradition of Heartland Trefoil's 1829, and Avalon Hill's 1830, players buy shares of stock in various railroads, take control of them, and build track from city to city, and city to mine. The railroads earn money by operating trains between stations. Player money is earned through dividends to stockholders. Unlike the above mentioned games, the rails are drawn right on the map, and owned by the railroads who built them (As in Mayfair's Empire Builder system.) The economic conditions change varying from boom times to depression, and mines appear and disappear at random throughout the game.