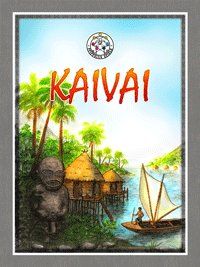 Kaivai, by the Ostertag brothers, is a board game about a dynamically-growing island region and the various uses of the islands. The title is Polynesian and means "Water eaters". The game is about catching fish to trade for shells and points. The shell money is used to build up the islands, in order to gain more points. At the start of the game the players bid for turn order. The highest bidder goes first and may move his ships - but must pay dearly for new islands. Those who bid less get to pay less for the islands, but don’t get to move as much. The players can choose from six different player actions. When a player chooses and action for the first time, it’s free. But if it’s chosen a second time, it must be paid for and the payment increases each subsequent time that action is chosen. At the start of the next round, the value of the shells is reduced and the fish come closer to rotting. After 8 rounds comes the final scoring, in which the portions of the islands controlled by the players are counted. (Spielbox) Expanded by: Kaivai Expansion