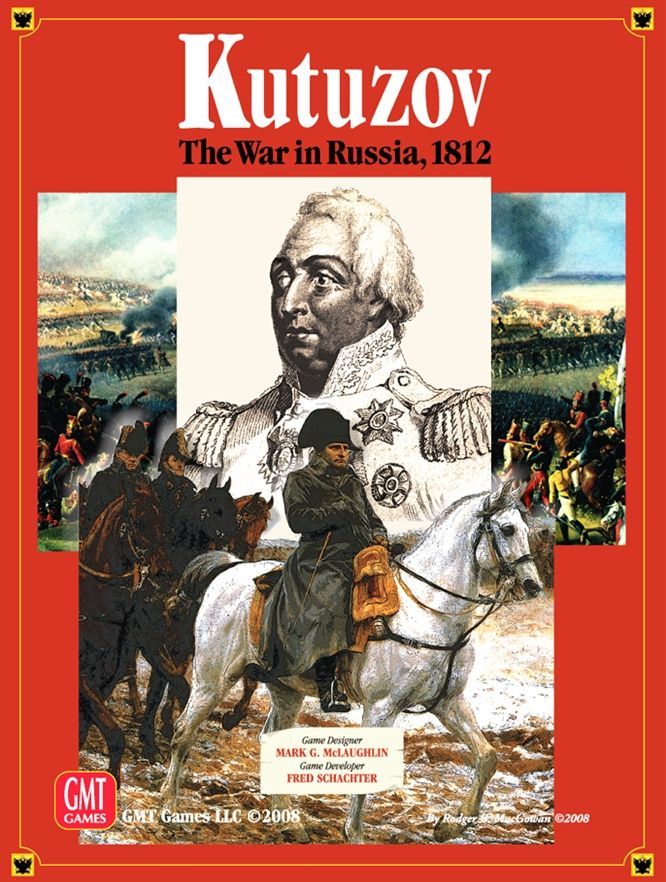 Kutuzov is an interactive, play it complete in one-sitting card-driven game of sweeping manoeuvres, epic battles, storied sieges, lethal attrition and crucial-to-win troop morale for one to four players from the designer of The Napoleonic Wars and Wellington. In the spring of 1812 Emperor Napoleon of France gathered the regiments of 20 nations together into the largest military force yet raised in Europe. That June he led this Grand Army of over 600,000 men across the Nieman River to begin what he believed would be his greatest and perhaps final triumph: the invasion and subjugation of Russia. As the defending armies fell back before this prodigious onslaught, Tsar Alexander turned to a pugnacious and crafty old warrior to help save his country, his people and his Romanov Dynasty: Marshal Mikhail KUTUZOV. Kutuzov uses the same basic rules system as found in The Napoleonic Wars, as it has been modified for even more interactive play in Wellington . As with the later title, there are no diplomatic or political rules: other than those which come into play should Imperial morale fall so low as to trigger the desertion of the Austrians or outright revolt of the Prussians. There are no naval rules other than a Russian ability to move between friendly ports and a "Hornblower" Home Card that allows for a Russian invasion on the Baltic Coast). Kutuzov is thus primarily a game of manoeuvre and combat, where players can recreate the sieges and legendary battles made so familiar to gamers as brought to life in such great books as Leo Tolstoy's War and Peace. As this is Russia, however, not all enemies stand in solid ranks before you. Players must contend not only with their opponents but with Cossack raiders, Polish Lancers, often brutally horrifying attrition, fragile morale, treacherous allies, political events from outside the theatre of war and, of course, "Scorched Earth" and "General Winter" himself, whose scourge effects both invader and defender of Holy Mother Russia. 110 Cards, most with quotes from the actual participants in that great struggle, drive the game and bring to it the flavour of being in Russia during the 1812 Campaign. The Imperials and Tsarists each have mini- "Home Decks" of a dozen cards each to share, thus increasing the chance that events, forces and options that were presented to the original contenders will arise during play. The other 86 cards, which include many "Must Play" political events, however, ensure every playing of the game will be very different. Kutuzov comes with a campaign game that can last one, two, three or four turns - but which includes numerous mechanisms that can bring the game to a "Sudden Death" ending at the conclusion of or even DURING A TURN. Mark and Fred, in seeking to deliver more value, variation and enjoyable gaming have provided two other game start scenarios which allow for the game to begin at the commencement of what would be turn two (On to Smolensk!) or turn three (Napoleon in Moscow) of the campaign. A fourth and rather unique method of play allows for two players to each take ONE of the powers from EACH side, in a highly competitive and unusual game of labyrinthine think and double-think. A fifth version allows for two players to play the game using a SINGLE hand of cards each, with "chips" to buy additional cards for their side as the play progresses. The Campaign and the Scenarios: "Invasion": A Turn One game start should see the French and their Allies' military juggernaut smash across the border and attempt to catch and annihilate the Russians before they can mass to defend their Motherland Can the players surpass their historical counterparts? "On to Smolensk !": This permits players to avoid the border battles and initial French advances to begin play at a watershed of the Campaign: The Grand Army confronting concentrated Russian forces defending Smolensk immediately before Kutuzov arrives to take command. Will the French advance on Moscow as they did historically or seek victory through an alternative offensive direction…north to St. Petersberg or south to seize the Ukraine and other southern victory points? "Napoleon in Moscow": In this version of Kutuzov the bloody Battle of Borodino has been fought. The Grand Army reposes in Moscow awaiting Russian surrender or at least agreement to terms. The first chill snow of Winter has fallen, harbinger what's to come: should the French remain deep in Russia hoping to conquer the country or is it time to withdraw to better defences for the 1813 Campaign? In all of the scenarios, the Imperial Powers have an initial advantage in numbers, leadership, Resources, and Morale. They are, after all, an Army that has never known defeat; a superb military instrument, led by the most powerful man in Europe with his devoted retinue of almost legendary Marshals. They face an enemy who has not tasted victory in Battle in nearly a generation, let alone full-scale war of the likes of which Napoleon wages. The French must take advantage of their superiority quickly, as that will soon dissipate in the immense marshes, unending steppes and fiercely fought over fields and cities of Russia. If they do not or can not succeed, then the advantage slips away to the forces of the Tsar, who, under Kutuzov, will not just be defending Russia, but will be advancing into the outer marches of that yet fragile empire led by their archenemy… Napoleon.