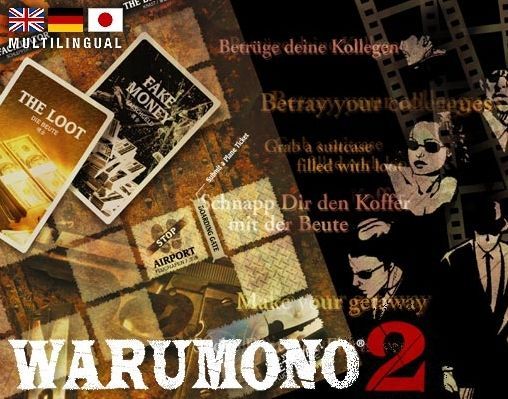 Warumono 2 ("The Evil") is a japanese game about the mafia and wil be released in Essen 2005. From a secretive underworld crime syndicate, a huge stockpile of illegal loot is stolen. The thieves are a group from the very same organization. However the real drama starts once the betrayal and ruthless deception and scrambling begins, as one of the thieves attempts to take the loot all for himself. Who will be the one to outfox their colleagues, evade the syndicate cronies, and make a getaway with a suitcase filled with loot? Enjoy the intense mind games played out against the backdrop of the criminal underworld. Comes with a multilingual rule book, including Japanese, English and German. Battle opponents regardless of the language barrier! http://www.grapac.co.jp/game/eng/eng_waru2/index.html