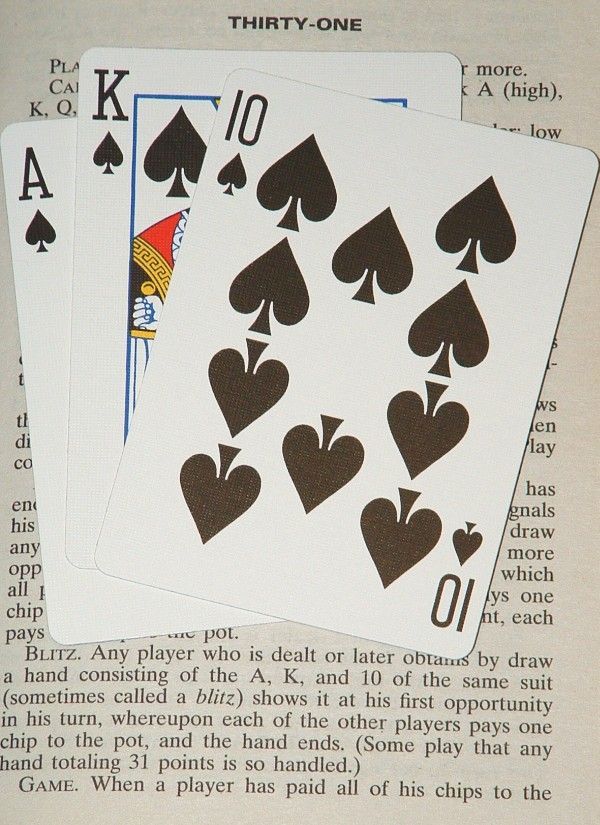 Description This is a simple draw and discard game, suitable for 2 to any number of players of all ages. Players start with three cards, and try to collect cards in a single suit worth the highest point total. What you need to Play 52 card deck, three markers (or coins, or bills for those inclined to gambling :-)) Game Play Deal three cards to each player and one to the discards. Dealer (first to draw and discard) rotates clockwise. Only cards of the same suit (see variation) count toward your point total. Players take turns to draw the top card from either the stock or the discards, then discard a card. In replacement for drawing and discarding, any player can “knock”, signifying that each player then has one more turn to draw and discard. When the turn returns to the “knocker”, then all players lay down their cards and announce their total. The lowest score discards a token/coin. In the event of a tie for lowest score, all lowest scoring tied players discard a token/coin. At any time, if a player collects 31 points (A, and two face cards or ten), then they immediately lay down their cards and announce “blitz” or “31”, and all other players discard a token/coin. If a player runs out of tokens/coins, then they are out of the game. The game ends with the last player standing (and collecting all the money, in the event that players have agreed to play for coins). Scoring Ace is worth 11 points, the kings, queens, and jacks are worth 10, and all other cards are worth their face value. Variations Three separate discard piles are dealt out at the start of the game. Count a hand of three of the same card (not the same suit) as 30. Allow players to play “on their honor” (i.e. after discarding all tokens or coins, each player can suffer one more loss before leaving the game, effectively making the game a four point per player game, rather than 3). If someone “blitzes” after someone has “knocked”, then the knocker pays two tokens/coins. If someone gets 31 after someone has “knocked”, then the hand only counts as 31 points, not as a “blitz”. (This has the effect of people getting more aggressive with knocks, as people try prevent potential blitzes against them.) Knocker wins/loses ties. You need a minimum score to knock, usually 21.