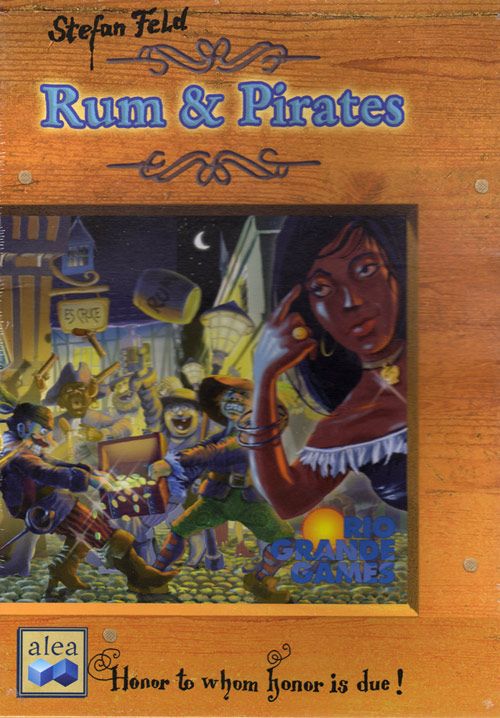 Rum and Pirates is a relatively simple movement and collection game, known in German as Um Ru(h)m und Ehre (For Rum/Renown and Honor). The game was designed by Stefan Feld and is for 2-5 players ages 9 and up and plays in 60-75 minutes. On the Alea complexity scale of 1 (simple) to 10 (difficult), this game rates a 2. (Editor's Note: That is the same complexity as Chinatown, Wyatt Earp, and Edel, Stein & Reich) The players take on the roles of freebooters who, back in their pirates' hideout, spend their time with all kinds of competitions - drinking, fighting, etc. All players move the main playing figure, the captain, through the alleys of the village, with the goal of gaining as much rum and reknown as possible. The end of each of the five rounds is also marked by a highly variable fight to claim the best sleeping spaces on board the ship (bed or board?). The game is a mixture of tactics, strategy, and luck. The die plays an important role in the game, but you still get the feeling of being at the mercy of fate only rarely. The game contains 76 plastic pirate figures, 9 game board pieces that ensure the board is always different, about 200 tiles, and 1 die. Description adapted from the Gamewire Essen Preview. This game is #10 in the Alea big box series.