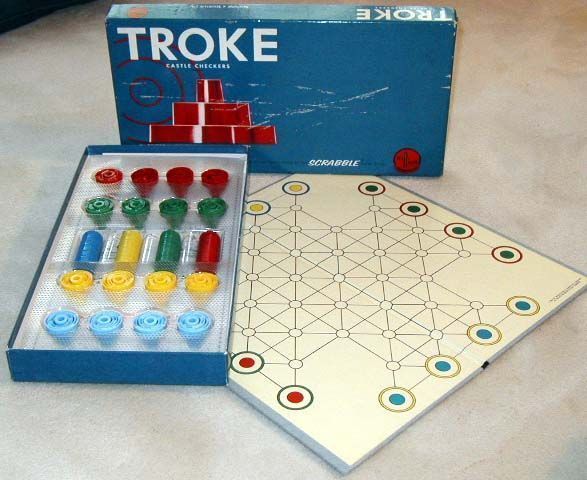 The sub-title for Troke is "Castle Checkers". Abstract strategy game where players move three different kinds of pieces (tower, wall, and moat) across a board diagonally forward, straight ahead or sideways, but never backwards. In some versions of the game, points are scored for capturing opponent's pieces and by forming complete "castles" (a tower, wall, and moat) on the player's goal line. Otherwise it is a race to see who can get all their pieces to goal line. A feature of the game is that if you merge with one or two different pieces you take one or two extra moves. You are allowed to merge (capture) with opponent’s pieces and thus move them away from their goal and towards your own. Making moves becomes complicated as the game progresses because capturing pieces requires that additional moves be made. If these extra moves can not be made, then the original capture move can not be made.