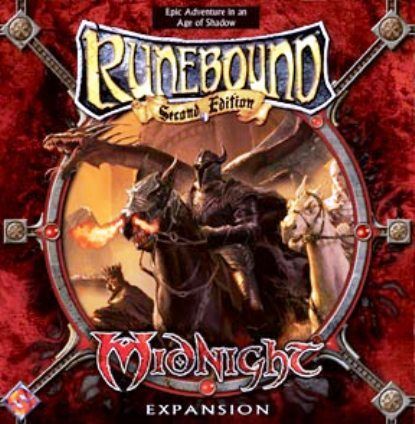 Belongs to the Runebound Series. From the Fantasy Flight Games Website: "This Runebound expansion melds the fun and exciting Runebound rules with the award-winning fan-favorite Midnight setting. The hero players must join forces to try to stop the rise to power of one of the Night Kings of the dark god Izrador. Best of all, the Night King is not merely a game mechanic ... it is another player! The Night King player can affect the outcomes of battles, send Challenges across the board to hunt down the heroes, and manipulate environmental effects. The heroes must infiltrate the Night King's strongholds and destroy his black mirrors, the source of Izrador's power. Meanwhile, each time a hero must escape or is knocked out, there is a chance that the threat level will rise. When the threat level reaches 10, the Night King unleashes all of his forces on Eredane, wiping out the heroes and any who stand in his way! This expansion adds an unprecedented level of player interaction to the Runebound play experience." Runebound: Midnight is the second Big Box Expansion for Runebound (Second Edition). It replaces some elements of the original game - including the map and playable characters - to provide a new and different gaming experience. This expansion ushers the Midnight RPG Mythos into the Runebound universe. You must own the Runebound basic game to play this expansion.