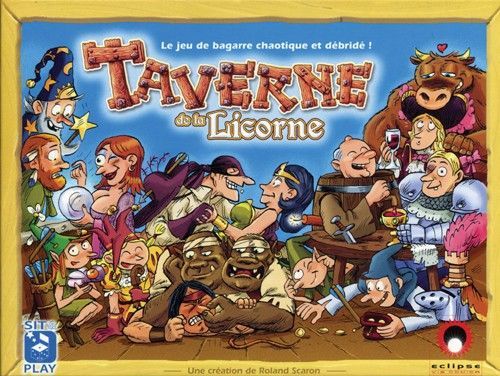 This is a game designe to simulate a tavern brawl. Each player receives 3 characters with different powers, a little money, 30 hit points and the 9 weapon cards. Before the first turn, each player chooses one of his characters, that will be played until the character has lost all hit points. Then he'll use any one of the two remaining until they suffer the same fate, upon which he'll use his last character. The turn is divised in 4 segments. All player undertake a segment before any begins the following segment. The 4 segments are: - "Dépensez vos butins" (expense your loot) where you can buy some of the "big" weapons cards and add them to your hand (the small ones are ALWAYS in your hand) - "Préparez vos esquives" (prepare your dodges) where you put on your character, face up, any of the weapons you bought, up to the prestige (fame) value of your character - "Attaquez" (attack) where each player chooses a weapon in hand and say who he attacks (players at his side for contact weapons, other players with ranged weapons) - "Videz vos querelles" (end your quarrels) where attacks are resolved. An attack is dodged if the defensive player has correctly found the value of the attack coming. A succesful attack make the defensive character lose some of his HP, and the attacking character win prestige or loot. In plus of the weapons card, there are other cards that players can use to affect the game. If a player arrives at 5 in prestige, he can call the militia that will end the game. If a character becomes KO by losing all his Hit Points, its player takes his next character. A player can come in the game, or leave, at any moment. The game is conceived for that. La Taverne de la Licorne (tavern of the unicorn) is a light hearted tavern, in opposition of La Taverne de la Crypte, which is a tavern with undeads and horrors. Both games are decorated with cartoon art.