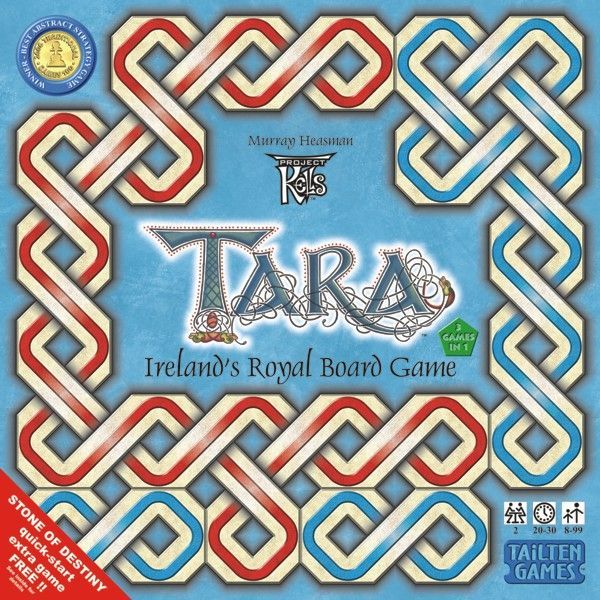 (second edition, TG552) Inspired by the Book of Kells and its mesmerizing patterns woven amongst the vellum pages, Project Kells evolved. Standing atop the Hill of Tara and contemplating the conjoined ringforts of Forradh and Teach Chormac, the games of Sacred Hill and High Kings of Tara were born. Steeped in the ancient legends of Ireland’s Celtic heritage and royal past, these unique games of pure strategy are appreciated by young and old alike. Tailten Games won the Games Magazine award for BEST ABSTRACT GAME 2006; the Spiele für Zwei - Spiele Akademie 2005 (Austria); Index 100 - Showcase 2005 in Ireland; and the award for 'Best Irish-Style Traditional Gift' 2005 in Ireland for Project Kells. According to the designer, Murray Heasman,"The game takes five minutes to learn, yet a lifetime to master." The sheer beauty of this game alone makes it a gift to treasure--but the three separate games each pose a daunting task for any strategic or abstract gamer. In all there are eight variants to stimulate the mind, so take it to your own level. From a more simple Sacred Hill, a go-like game with its' elemental challenges, to an all-out-brain-burner in the form of Poisoned Chalice... Project Kells combines the best of beauty, gameplay, theme, and replay value. You’ll be amazed at the possibilities. Once you’ve learned the basics, be prepared to delve deeper, because you’re likely to be already hooked on this game. Scoring with knots (instead of kingdoms) will get you addicted. This first game: Sacred Hill introduces the basic elements of play. The aim of both games is the same -- to have the least number of kingdoms by the time the game is ended, a kingdom being a group of linked ring forts. There are two phases to the game. In manoeuvres (first phase) you are building a network of unconnected ring forts scattered around the board. In Battle (second phase) you are adding ring forts next to your own, linking them together with bridge tiles, to form larger (and fewer) kingdoms. This starts to magically create the Celtic knotwork. Isolated ring forts that are besieged must be captured. No ties are possible with either ringfort scoring or knot scoring.=== The second game: High Kings of Tara introduces the kings. Each player has three which do the work of building your ring forts. They move like the knight in chess and add many more twists and turns to the game, taking it to another dimension. Kings can capture enemy ring forts and kings; they can also be immobilized. Your own kings cannot work in tandem and they must always move to a vacant hill whenever possible. Ties are possible, but the duality of scoring pursuits (ringforts versus captured kings) usually prevents this possibility. This is especially true in tournament scoring... Those who feel that they have mastered those variants are encouraged to try the real brain burner of the bunch. Poisoned Chalice Played at right angles to each other, each player tries to exert total control over each other from a position of inferiority. The end scoring is the same as in the Sacred Hill variant, but in this endeavor the limitations of placement create challenging strategic obstacles for both opponents. It is possible to exert control over an opponent in such a way that at times they are limited to one possibility for tile placement. However, there are twists that occur if a piece is captured (surrounded) on the board (like in 'go'). No ties are possible with either ringfort scoring or knot scoring. This is very probably the same game [system] as The High Kings of Tara.