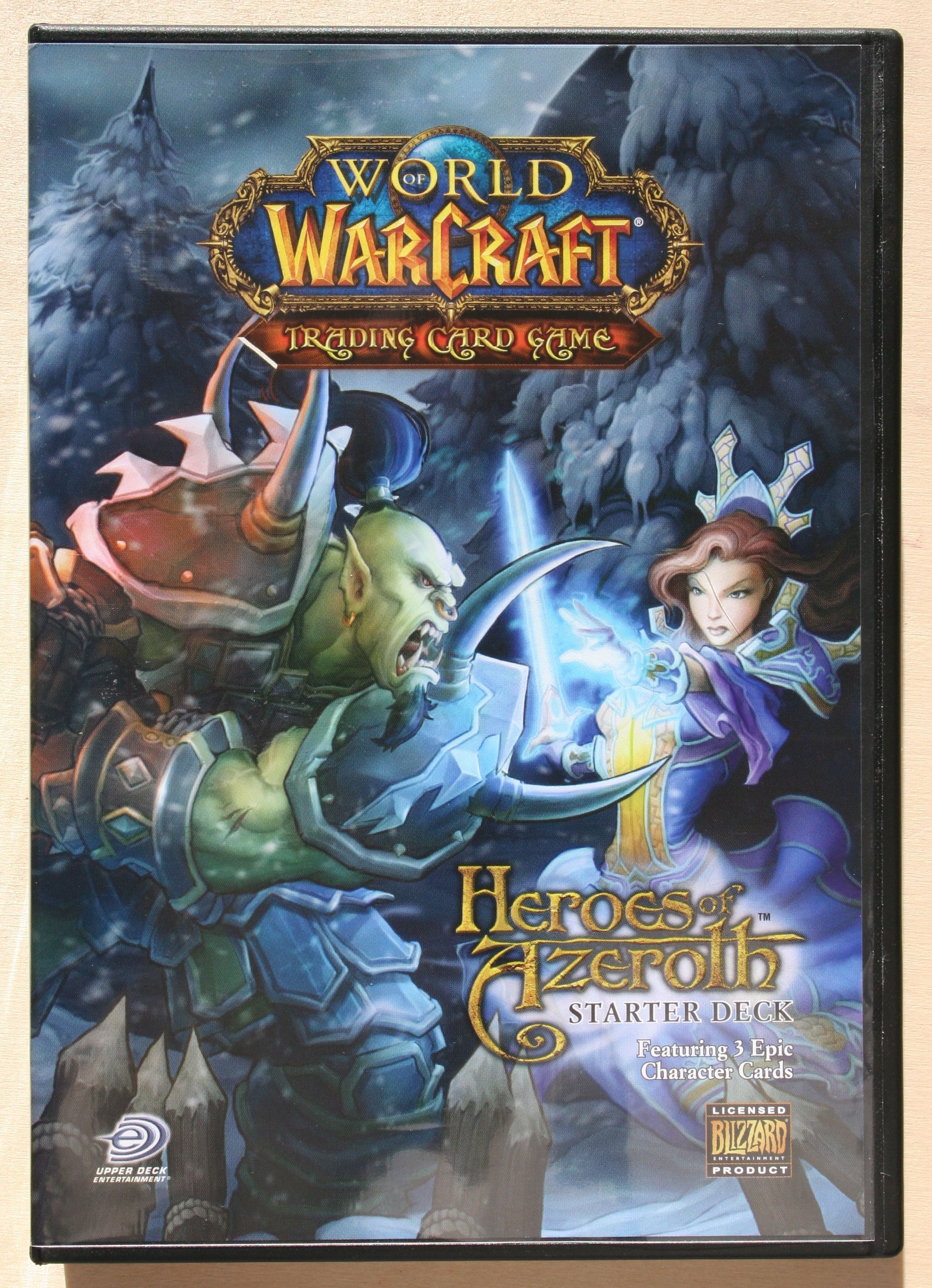 This is a collectible trading card game published by Upper Deck in 2006 (Cryptozoic Entertainment took over the license and game in 2010) based on the massively multi-player online roleplaying game "World of Warcraft." The World of Warcraft Trading Card Game draws from the rich lore of the Warcraft universe. Two factions are battling for supremacy over Azeroth—the Horde and the Alliance—and each time you play, you choose a hero from one of these factions to represent you. Your hero is the leader of your party who fights alongside your allies. The cards that you play will allow you to equip your hero with weapons and armor, use spells and talents, invite allies into your party, and complete quests. With each successive TCG set, the theme and cards echo the current max-level content from the online game. The object of the game is to defeat your opponents before they defeat you. Over the course of the game, your hero and allies will deal damage to your opponents’ heroes and allies, and that damage is permanent unless it is healed. If your hero takes damage equal to or greater than his or her health, you’re out of the game. Sets released Heroes of Azeroth (released October 2006) Through the Dark Portal (released April 2007) Fires of Outland (released August 2007) March of The Legion (released December 2007) Servants of the Betrayer (released April 2008) The Hunt for Illidan (released July 2008) Drums of War (released November 2008) Blood of Gladiators (released March 2009) Fields of Honor (released June 2009) Scourgewar (released November 2009) Wrathgate (released May 2010) Class Starter deck (July 2010) Archives (released August 2010) Icecrown (released September 2010) Worldbreaker (released December 2010) War of the Elements (released April 2011) Twilight of the Dragons (released July 2011) Throne of the Tides (released October 2011) Crown of the Heavens (released February 2012) Tomb of the Forgotten (released June 2012) War of the Ancients (released October 2012) Betrayal of the Guardian (released February 2013) Reign of Fire (released July 2013) Raid Decks Onyxia's Lair (December 2006) - Featuring the black dragon Onyxia. Contains special rules for the deck. Molten Core (May 2007) - Includes ten epic bosses, from Lucifron to Ragnaros the Firelord. It has a different ruleset than the Onyxia's Lair Raid Deck. Magtheridon's Lair (January 2008) - Contains the Pit Lord Magtheridon, his shadow channelers, and the cubes required to interact with him. Black Temple (September 2008) - Based around Illidan Stormrage. Contains a 10 hero raid set with heroes such as Supremus and "The Betrayer". Naxxramas (December 2009) - An undead necropolis, seat of the lich Kel'Thuzad. Assault On Icecrown Citadel (February 2011) - This four-player game has everything you and three friends need to play all out of the box. Play as Highlord Tirion Fordring, Lady Jaina Proudmoore, or Queen Sylvanas Windrunner and battle against the Lich King! Battle of the Aspects (August 2012) - The final confrontation with Deathwing, the corrupted Aspect of Earth. Caverns of Time (March 2013) - Take on iconic characters from the past, present, and future. Contains 8 raid heroes. Dungeon Decks There are now not just huge raids for players to play against but entirely new dungeons for you to explore and reclaim! Form a party with two friends to take on the dungeon denizens! You don't need a pilot for the Dungeon Deck as The deck plays itself! You can customize the Dungeon Deck for difficulty and your heros will level up as you gain experience and you can spend those experience points improving your player deck by adding cards. Each dungeon deck contains 60 cards per dungeon deck, Two Dungeon Boss cards, hero Character Sheets, Achievement Cards, and a Nine-card all-foil Treasure Pack (also sold seperately at $6.00 MSRP) for an MSRP of $20.00. These dungeon decks are specifically designed to be played against three Class Starter decks which are sold seperately, allowing for players to jump right into the experience without having to have a deep card collection. Shadowfang Keep (November 2011) Scarlet Monastery (Novemeber 2011) The Deadmines (November 2011) Periodically, bonus card sets are released independently to mark special events or dates. Feast of Winter Veil - A special collector's set released in November 2007 which corresponds with the holiday in the online game. This comes in a presentation box which contains a booster pack from Heroes of Azeroth, Through the Dark Portal or Fires of Outland, a deck box and 10 Winter Veil themed cards, as well as 2 vanity pets. Darkmoon Faire - A special collector's set released in September 2008 which includes 5 preset Darkmoon Faire themed cards and 2 Through the Dark Portal booster packs. Arena Grand Melee - A small collector's set released to supplement the Arena theme. This was released with two decks, one for the Alliance and one for the Horde. Burning Crusade Set - A set of 3 cards to mark the release of World of Warcraft: The Burning Crusade. Two Heroes of Azeroth starter decks were included alongside the exclusive cards. Wrath of the Lich King Set - 2 exclusive cards were included in the Collector's Edition of WotLK with 2 March of the Legion starter decks. Cataclysm set - Two exclusive hero cards, marking the first appearance of goblin and worgen heroes in the WOW:TCG. One 60-card deck from the new Wrathgate series featuring two extended art cards and visuals from several of fantasy's top creators.