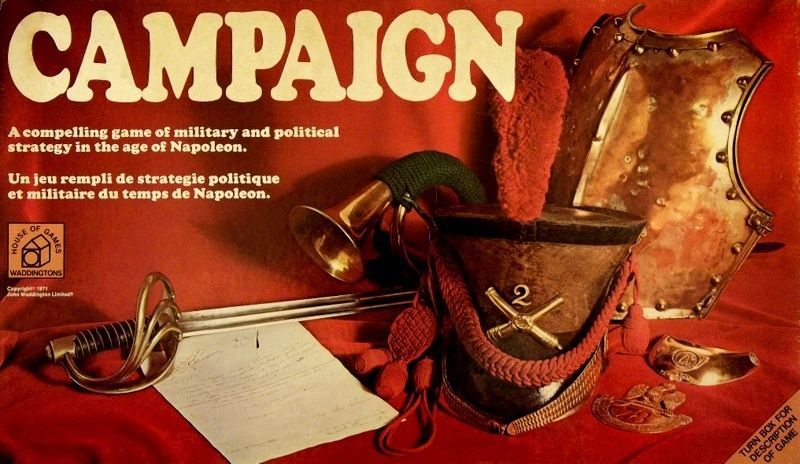 Not to be confused with Campaign, the identically named game produced by Wills and Hepworth in the 1940's. "An exciting strategy game in which each player can become a Napoleon or a Wellington leading his army across Europe. Famous battles can be re-fought and alliances can be made and broken with this compelling game of military and political strategy" Large playing board in three sections, four sets of army pieces in red, white, blue and light green, comprising 1 General, 9 infantry and 9 cavalry units. Six sets of 4 town cards of different colors, 4 alliance cards, 2 dice, 6 page rule book, and a 4 page "The Years of Napoleon" historical booklet. The game reproduces the Napoleonic wars at the strategic level in a very abstract fashion (all players are equal). It can be won either by the outright defeat of your opponent, or (more likely) by acquiring towns controlling large areas of territory. The board is an abstract representation of Europe and western Russia and is divided into six areas of roughly equal size representing France, Prussia, Russia, Austria, Italy and Spain. Each country has four provincial towns, and five of the countries used as starting countries also have a capital city. Parts of the board, particularly the central area, have areas of impenetrable mountains, forests, and sea which restrict the movement of the troops. There are introductory and standard rules. Normally, each player selects a country, but in the two player game each gets two countries except that the France + Prussia combo is not allowed. The pieces move using the dice, and combat is deterministic. The throw can be used all on one piece or many pieces. The full throw does not have to be used. The pieces are placed in a set format on the country selected, with the General on the capital square and four infanty and four cavalry. The town cards are used to keep track of who controls what. The pieces move in set ways. The General moves one square in any direction. When it attacks it has a value of one and when defending a value of two. The General must be present to take a town. Cavalry moves two squares at a time and must move horizontally or vertically but never diagonally. Infantry moves one square and only diagonally. Pieces cannot pass through opposing lines unless there is a clear gap of at least one square. Combat is like movement: one considers which pieces could be moved to the target piece's square and totals up the combat value --if large enough, the opposing piece is removed. Only one piece can be attacked in a turn. In the standard game, adjacent pieces also support each other (in a manner reminiscent of Diplomacy), which introduces a fair amount of tactics in on-going battles. Lost pieces are regenerated in your country's mustering area, forcing you to keep a constant flow of recruits towards the front. In the standard game, the towns also represent logistical support --lose the town and you lose the corresponding piece. The odd movement system means you actually have two sets of cavalry and infantry pieces on the board, each set (which we could call "odd" and "even") being unable to assist the other. A capital can only be captured after the provincial towns have been captured. Where more than two players are playing you can agree to ally with another player and exchange alliance cards as reminders. An ally cannot cross into his ally's territory without his consent. Alliances can be broken simply by announcing the fact; you can attack your former ally on your next turn only, giving him a turn to re-deploy. The game is won if the player captures all his opponents capitals or captures 8 towns of any colour but not including the 4 in his own country. You also win if your opponent's General is left with no troops. Campaign is basically a pure strategy game. It you are in a position to attack a piece, you will take it. However, there is some luck depending on how high a movement throw you have. from the Waddington ad for the game from 1976: "This absorbing strategy game captures the tension and the pressures of the famous Napoleonc battles. Alliances are made and broken and complex manoevers bring victory or defeat"