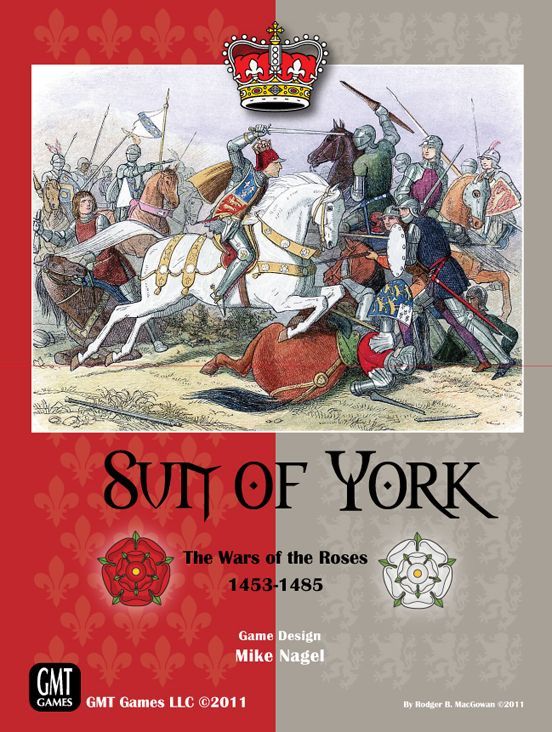 From the back of the game: The Wars of the Roses (1453-1485) were the result of the struggle for the English crown between the Houses of Lancaster and York ... both descended from the Plantagenet line ... both with equal claim to the throne. By the end of the bloody struggle, both houses would be extinct and the crown grasped by the first of the Tudors. Sun of York is a card game depicting the tactical battles fought between the two royal houses. Represented by the cards are all the day's major leaders, including King Henry VI (too weak a leader to maintain control of the kingdom), Margaret of Anjou (Henry's strong-willed and manipulative queen), King Edward IV (organizational genius and longest holder of the Crown), King Richard III (charismatic leader of questionable morals) and Richard Neville, Earl of Warwick (the "King Maker"). Troop cards include Levies, Longbowmen, Knights, Cavalry, and mercenaries from the Continent, among others. Terrain features and Special event cards are also included. Every major engagement (and a few minor ones) is included in Sun of York, for a total of eighteen scenarios in all! Rules for randomly generated scenarios are included as is a campaign system allowing players to fight out the Wars to their bloody conclusion. Components include 200 cards, two player aid sheets, and one sheet of 234 status markers. [This is a desktop published game. Players are required to assemble all game components.] Now also available (August 2011) through GMT Games as a boxed set!